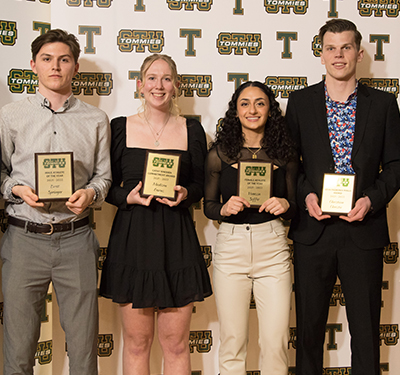 Vanessa Soffee, veteran guard for the women’s basketball team, and Brett Springer, experienced striker for the men’s soccer team, were named Athlete of the Year 2021-2022.

Soffee is the Top Defense Player and MVP of his team, while also being named an all-ACAA first-team conference player and the All-Canadian Canadian Collegiate Athletic Association.

“This is his second season as an All-Canadian in three years,” said Tommies Head Coach Fred Connors. “He controls the game in many ways and shows up when we need him the most.”

Springer is the MVP of men’s football in addition to being named ACAA’s first-team conference player, ACAA’s Player of the Year, and Canadian All-Canadian Collegiate Athletic Association. At the CCAA Men’s National Football Championship, Springer was named the tournament all-star.

“Brett really deserves this prestigious award,” said Tommies Head Coach John-Ryan Morrison. “His success was no accident. It’s a product of his hard work off-season and every day in training.”

Owens, a five-time CCAA National Scholar, is a recipient of the Cathy Wadden Commitment Award. On top of his academic achievements, he is an all ACAA conference player and was awarded the Rod Shoveller Memorial Award, given annually to ACAA basketball players who have contributed to sport and society through excellence in academics, athletics, leadership, and sportsmanship.

“Maddy has been the leader of the Tommies since she came here,” Connors said. “He has worked hard to keep the team fit and has always played a very unselfish brand of basketball.”

Christie, a two-time CCAA National scholar, was named the winner of the John Frederick Walls Memorial Award. He is a two-time STU Male Athlete of the Year and former ACAA Male Volleyball Player of the Year who spends his free time giving back to the community through coaching and refereeing.

“Christian is the type of person you look for when recruiting student athletes,” says Head Coach Henri Mallet. “He has made our program and university proud since he joined Green and Gold.”