Alex Garcia, the star of the Brazilian basketball team, serves a “camp” for young people from Palmas 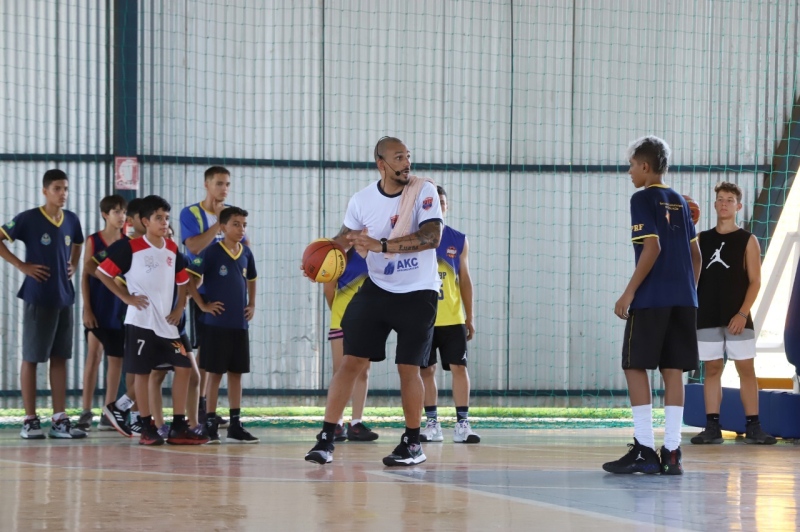 He turned 42 last month and has 25 years of professional experience in basketball, with stints in the American league, the NBA, where he played for the San Antonio Spurs, one of the sport’s biggest franchises, and the New Orleans Hornets in the US, between 2004 and 2006, former winger of the national team – with 137 games-, six times national champion and holder of the best winger title in the national league, NBB (Novo Basquete Brasil), for four seasons between 2008 and 2012, until his retirement from the Brazilian team last year.

We are talking about Alex Garcia, from São Paulo from Orlândia, who is still active in the spotlight of Basket Bauru, in Brazil’s Novo Basquete gold league, and who is in Palmas this Saturday, 2 April.

Alex Garcia serves “camp” for 100 athletes from Tocantins, in an event organized by the Tocantinense Basketball Federation (FTB). Youth from 14 to 18 years receive instruction on the technique and basics of the sport, free of charge for young athletes. These events allow professional athletes to interact with local players belonging to schools and basketball associations.

“It’s great to be here at Tocantins, first time here. The kids really impressed me for their enthusiasm, willingness to learn, the sparkle in their eyes for basketball, for the exchange they had, this massification of American basketball. Every boy men like that want to be American players” evaluated the player who scored 24 of the team’s 82 points by beating União Corinthians (77) last week.

Garcia noted that there was a lack of investment and more exchange between local and state athletes, so the talent of the Tocantins in basketball could be formed. “This requires more investment, better exchanges with other Brazilian states, especially the State of São Paulo, where the majority of the teams are”.

Athletes are also pleased with the passion and willingness to learn from the athletes in Palmas, as an important factor for the improvement of the sport. “Because of their enthusiasm, their desire to learn and the attention they pay to every move the teacher makes, it is possible that talent will emerge here.”

João Vitor Gabino Guimarães, 15, participated in the “camp” and said the event helped bridge the gap between what he saw locally and the professional reality of the sport. “Looking here I feel closer than I thought, for me it’s something a bit deified, a level I’ll never reach, a bit of talent, and now seeing it up close is something more achievable than I imagined.”