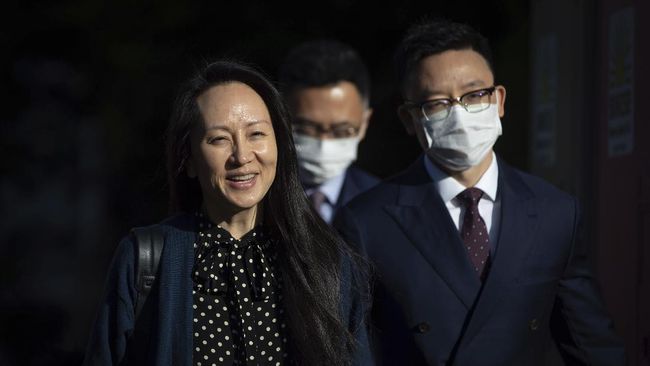 Jakarta, CNBC Indonesia – Huawei CFO Meng Wanzhou will be released and allowed to return to China, this decision came after an agreement with the United States government following allegations of fraud.

The daughter of the founder of a Chinese technology company, was arrested in Canada in December 2018 when the US sought to extradite her on charges of bank fraud.

The arrests led Chinese authorities to arrest Canadian businessman Michael Spavor and former diplomat Michael Kovrig. The Chinese side has repeatedly denied that the cases are related to Meng.

Canadian Prime Minister Justin Trudeau announced on Friday night that the two men had been released and were on their way home from China.

At that time, Meng pleaded not guilty to the charges leveled against her. However, part of the agreement says Meng remains responsible for her leading role in a scheme to commit fraud at global financial institutions. This was confirmed by the acting US Attorney for the Eastern District of New York Nicole Boeckmann in a statement.

According to Boeckmann, Meng admitted to having made “multiple material misrepresentations” when Huawei’s CFO about the company’s business in Iran, in conversations with senior executives of a financial institution. The government claims he did so to continue Huawei’s business relationship with the company. Boeckmann said the confession confirmed the core allegations against Meng.

A media report also linked Hong Kong-based HSBC to the case. However, the bank previously said the US Department of Justice had confirmed it was not under investigation in the case.

Regarding this, a Huawei spokesman still declined to comment. On another occasion, a lawyer representing Meng said he was happy with the deal.

“He has pleaded not guilty and we fully expect the charges to be dismissed with prejudice after 14 months,” said attorney William W. Taylor III. “Now, he will be free to return home to be with his family.”

In a news conference late Friday, Trudeau said Kovrig and Spavor had been through an ordeal. In August, China sentenced Spavor to 11 years in prison on spying charges. Kovrig had not been sentenced before his release.