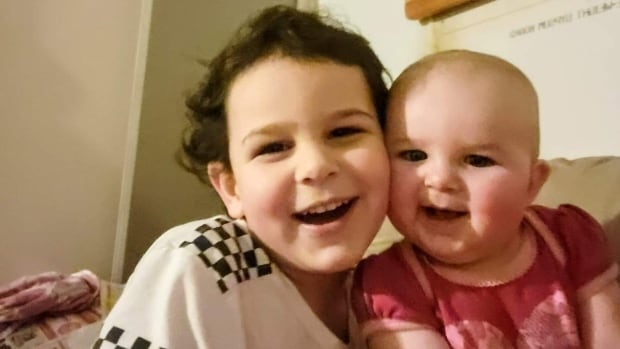 A yellow warning was issued on Saturday for the two children from Fort St. John, BC

Police said they were looking for four-year-old Liam Bellamy and 10-month-old Myra Bellamy, along with their mother Dawn Bellamy, who was allegedly abducted by Jason Dalrymple’s father on Thursday.

Police said Dalrymple was believed to be heading east, possibly into Ontario, and that Dawn Bellamy and her children were in danger when they were nearby.

Police are looking for an olive green 2004 Jeep Grand Cherokee with license plate BC: HT1 84A.

Two dogs and a cat may also be with them, police said.

Police said the mother and children were last seen at around 11 a.m. PT on March 24.

Dalrymple is described as having blue eyes, baldness with a mustache or beard that is light brown and reddish in color.

Liam is described as having short dark brown hair with brown eyes, while his baby sister Myra has very light hair with hazel-blue eyes.

Dawn Bellamy is described as Native, five foot five and 110 pounds with dark brown hair and hazel eyes. He has a scar on his forehead and probably wears blue glasses.

Police said not to approach the vehicle, but immediately called 9-1-1.