Badosa, Sabalenka and Bencic in Charleston Round of 16 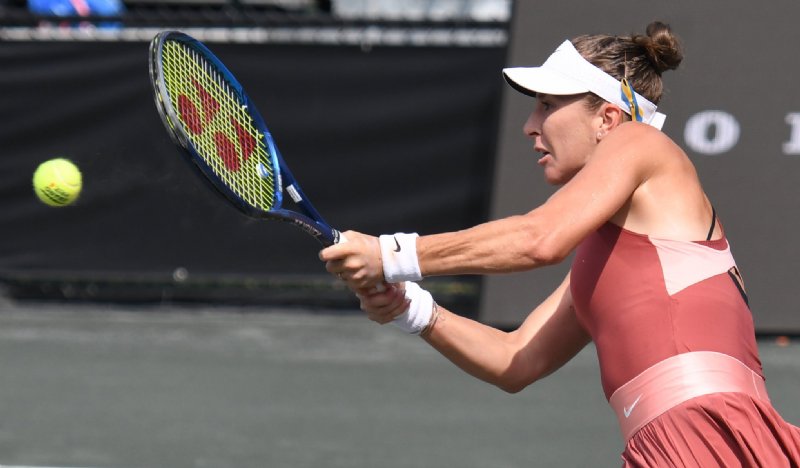 Charleston (USA) – Charleston WTA 500 top seeds Paula Badosa and Aryna Sabalenka won their debut matches this Wednesday and secured their place in the last 16 of the traditional tournament played on har-tru (green clay) courts. Belinda Bencic is also certain to qualify for the round of 16, which recorded her second game this week.

Number 3 in the world and last year’s semifinalist, Badosa beat Anna Bondar of Hungary, ranked 73rd, by 6/1 and 6/4. Although the match only lasted 1h35, it was stopped for a long time due to rain in the second set. “I knew that I had to play the long points, that I would really need my forehand, and that I had to be aggressive from behind the court”, analyzes the Spaniard who made 15 winners, 19 errors and made four breaks in the game.

What is the way to close it@paulabadosa showing why he is now ranked 3rd in the world by clinical match points…#CharlestonOpen pic.twitter.com/5q6tiy9fOL

Last year, Badosa was only ranked 71st and then beat Ashleigh Barty who was then number one.. Even from that, he knew that debuting could be difficult. “It’s very special to be back in this tournament, amazing. Everything was done with a lot of love and we players are very grateful for that. Last year I was here at number 70 in the world and today I faced a girl who is 70 in the world. So I have a lot of respect for these players”.

Badosa’s next match in Charleston will be against American Claire Liu, 21 and ranked 89th, who defeated experienced China’s Shuai Zhang 7/5, 2/6 and 6/4. Liu has won his previous two duels against Badosa, the first in the ITF final in Italy in 2017 and the second in the Bucharest WTA qualifiers in 2018.

Already number 5 in the world Aryna Sabalenka surpassed North American Alison Riske, ranked 43rd, with 7/6 (7-3) and 6/4. Sabalenka leads the winner tally by 30 to 12 and made 44 unforced errors against her 26 opponents. Your opponent in the round of 16 is another North American, Amanda Anisimova, 21 years old, ranked 47. The previous two matches were won by Anisimova.

In turn, Belinda Bencic got the better of 16 year old Czech girl Linda Fruhvirtova, ranked 188, with 6/1 and 7/6 (8-6). Semi-finalists Miami last week and world number 21, Switzerland will be the next rival to the American Madison Keys. They have faced each other three times and the Keys lead a record 2-1.

The advantage, Jabeur has suspended the game

Ons Jabeur of Tunisia, seeded 4th in Charleston and number 10 in the world, his debut match was stopped by the rain as he came close to winning. She was leading the score against America’s Emma Navarro by 6/3 and 5/2 when the dispute was stopped. The match will only return this Thursday and the winner will face Romania’s Irina Begu in the last 16.

Leylah Fernandez of Canada, seeded seventh and ranked 19th, did not even enter the field. She faced Poland’s Magda Linette. And if they win, they will have to beat 36-year-old Kaia Kanepi of Estonia, who this Wednesday beat Magda Linette of Poland 7/5 and 6/3.

With the weather not letting up, unfortunately the game was played at night.