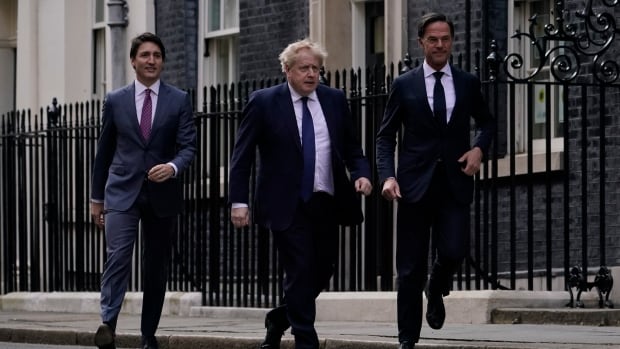 Canada announced a further round of sanctions against Russia on Monday following a meeting between Prime Minister Justin Trudeau and his British and Dutch counterparts.

Another 10 people have been added to the sanctions list. Their names were proposed by Alexei Navalny, a jailed Russian opposition leader and activist.

“These sanctions increase the pressure on the Russian leadership, including Putin’s inner circle,” Trudeau said.

The Liberal government has faced increasing pressure – especially from the Ukrainian government – to target Abramovich.

Canadian sanctions to date have targeted hundreds of officials in the Russian regime and a small number of oligarchs.

While the Russian economy and Russian businesses have been hit hard, there is little sign of any impact in Ukraine. Attempts to build a humanitarian corridor have failed and 1.5 million people have fled Ukraine to escape the relentless bombardment.

The Allies said they recognized the break.

“Yes, I agree with you. Sanctions are not having the desired effect,” Dutch Prime Minister Mark Rutte said in response to reporters’ questions Monday. “They have great influence on Russia but they are not against Russia.”

British Prime Minister Boris Johnson held this meeting with Trudeau and Rutte to promote his idea of ​​a humanitarian coalition to help Ukraine.

Even after the meeting, the corridor remains a vague proposal to provide long-term assistance to Ukraine.

“As the Ukrainian people resisted the Russian attack with courage and tenacity, the international community must assist their cause in every way we can,” Johnson said.

The three leaders, who met at a Royal Air Force base west of London, also discussed Europe’s dependence on Russian oil and natural gas.

Trudeau said Europeans were starting to realize that Moscow was an unreliable partner.

Johnson has suggested that diverting European energy sources from Russia’s control could affect the world’s climate change targets. He insisted that did not mean the goal was abandoned.

The US, meanwhile, is discussing a ban on Russian oil. US Secretary of State Antony Blinken said Washington was prepared to move unilaterally if necessary.

Rutte said that while no one doubts Europe should diversify its energy supply, the work of disentangling the continent from Moscow must be carried out in an orderly manner.

“It’s a step-by-step process,” he said. “We have to make sure to reduce our dependence on Russian oil and natural gas. If we force companies to stop doing business with Russia in the region, it will have very big consequences.”

Trudeau was greeted at 10 Downing Street by a handful of angry protesters waving Canadian flags and calling for the release of Tamara Lich, one of the organizers of the anti-vaccine mandate convoy that had occupied downtown Ottawa for weeks.

The protests prompted Trudeau to use a separate entrance.