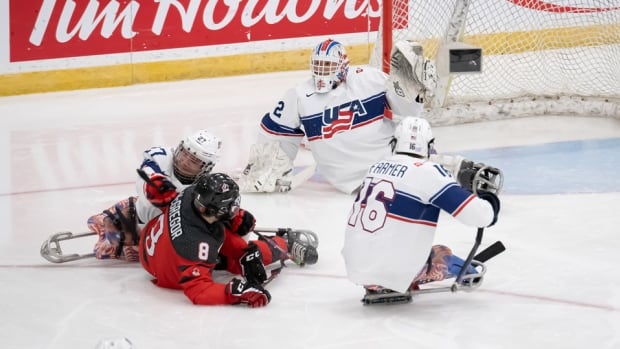 American star Declan Farmer fired the power-play winner 1:16 into the extra frame to lift the six-time defending gold medalist to his third straight win in the four-team tournament.

Canada fought back from a two-goal deficit to force extra time, with captain Tyler McGregor leading the way.

The three-time Paralympic medalist scored twice in the second half, including the equalizer for his 100th international goal. Canadian defender Adam Dixon assisted on both goals.

Jean-François Huneault made 20 saves for Canada playing all three periods, including several key stoppages to keep the game even.

The Para Hockey Cup continues Thursday with the semifinals. Canada will face the Czech Republic for a spot in Saturday’s gold medal game, while the US will face Italy in the other semifinal.

Canada is seeking its first gold medal at the tournament since 2013.

Wednesday’s game marked a major improvement for Canada after giving up 12 goals in two losses against the US in September at the International Para Hockey Cup in Ostrava, Czech Republic – including a closing loss in the gold medal game.

The Americans also beat Canada for gold at the Beijing Paralympics last March, but the Canadians are gaining confidence.

“2-0 down, the way we came back and fought was really nice. If anything, we left today with more confidence than when we entered the game, and I think the Americans left with a little more doubt.” , and it’s exciting for us moving forward,” said McGregor.

‘An excellent exhibition of what Para-hockey can do’

Both teams entered Wednesday’s game undefeated, and the matchup lived up to expectations with back-and-forth action.

“It was a great showcase of what Para-hockey can do at the highest level. Those were two teams risking it all tonight. When you see an effort like that you are proud to be a part of the game,” said the Canadian head coach last year. first Russ Herrington.

Josh Misiewicz opened the scoring for the US midway through the first half, while David Eustace went top-flight for the insurance marker just over six minutes later.

Supported by the home crowd at the Lunenburg County Lifestyle Center, the Canadians battled for an equalizer in the second half as the momentum shifted.

“Everyone went tonight. We’re getting better every shift, and it’s great to see everyone gel and put in an effort like that,” said Canadian defender Tyrone Henry.

“Both teams come in with pace and are physically strong and it’s great to play like that. We know we can play with that pace and it’s important to follow through tomorrow.”

Huneault, playing in his second international event, denied Farmer with a shoulder save in the dying minutes of the second half, while American keeper Jen Lee also made a massive save to keep out a green goal.

The Czechs beat Italy 3-2 earlier on Wednesday, with two goals from Filip Vesely leading the way.