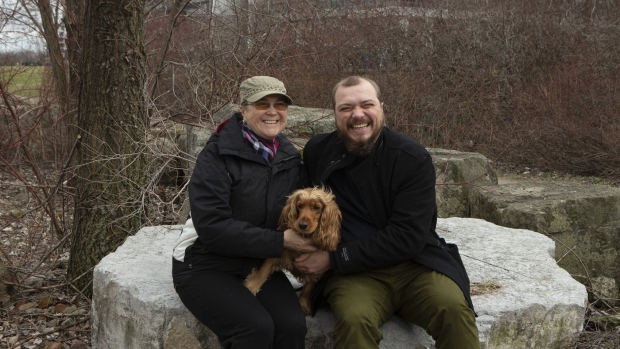 TORONTO — Just weeks ago Maksym Sliepukhov took refuge in the Ukrainian jungle after a Russian missile hit the military base where he and fellow international volunteers train for combat.

It was a world away from his job as a warehouse logistics manager in Toronto – a post he left so he could travel to Ukraine to join the fight and help his mother, who lives in Kyiv, escape the country.

Now, having survived a missile attack and taken his mother to Canada, Sliepukhov is sitting in a western Toronto restaurant recounting his time in Ukraine.

“Before February 24, my ordinary day was like an ordinary day, a normal human day. After February 24 … It was the only right decision to make,” Sliepukhov said of choosing to join the fight in Ukraine.

Sliepukhov was among foreign volunteers who headed to the country to join the international legion of the Ukrainian army after the Russian invasion began on February 24.

The 36-year-old first flew to Poland in February and then went to Ukraine with plans to go to the capital, where his mother lives.

“My main goal from the start was to go to Kyiv, because I am from Kyiv, but when we arrived in Ukraine, the situation changed so quickly,” he said.

Sliepukhov, who became a Canadian citizen last year, instead went to a training base near Lviv, in western Ukraine. Because he had served in the Ukrainian army for a year before immigrating to Canada in 2014, he said he was made a platoon commander and led a group of 38 international volunteers on a training mission.

The base was suddenly targeted by Russian missiles last month, he said.

“We were supposed to be in training for about two to three weeks gathering applicants and training them, assigning them to a regiment but the bombing changed that,” Sliepukhov said.

“The bombing was so random, no one knew what to do. I was talking to the commanders… they said ‘wake up your men, count them to make sure we have everyone, go… to the forest, we’ll think about it . go out.”‘

The group took refuge in the forest, Sliepukhov said, where they also helped support a platoon that lost members in the attack. None of the members of Sliepukhov’s platoon died, but several were injured, he said.

“After the attack, basically our commander, my officer, told us first to count everyone, check their mental state,” he recalled. “Then we offer them, anyone who is not ready to stay … will be able to leave (Ukraine). We tell them, no one will be prosecuted.”

Some members of his platoon decided to leave Ukraine after the Russian attack, he said.

Sliepukhov’s mother, meanwhile, traveled from Kyiv to Poland and was waiting to get a visa that would allow her to go to Canada with her son when he joined her.

“He had a little bit of stress going over the border and living in Poland alone while I was in Ukraine, and watching the country get destroyed,” he said.

“He is still stressed but he is keeping in touch with everyone he meets in Poland who will be coming to Canada and with friends who are still in Ukraine.”

The federal government launched a special visitor visa program on March 17 that allows those fleeing the war in Ukraine to work and study in Canada for three years while they decide whether or not to return home.

As of March 30, 60,000 Ukrainians and their families had applied to come to Canada under the program, and another 12,000 had followed traditional immigration flows since January.

Sliepukhov said he started his mother’s visa application even before Canada announced a special program for Ukraine and his girlfriend helped follow up while he was at a military base near Lviv.

Kiran Thind, Sliepukhov’s girlfriend, noted that the government hotline for Ukraine’s special visa program offers services in English and French but Sliepukhov’s mother does not speak either language.

As he adjusts to life in Toronto, Sliepukhov says he wants to continue to support the Ukraine war effort by possibly helping train volunteers in Canada who want to go to Ukraine like him.

“To get it right, we need to form groups, interview (volunteers) to find out what exactly is the purpose they have,” he said. “We train people (on) basic tactical military skills for survival, such as first aid in the field, such as tactical response.”

Sliepukhov said he was considering returning to Ukraine to rejoin the international legion as well.

More than four million Ukrainians have fled the country since the Russian invasion began and millions more have been displaced.

This Canadian Press report was first published on April 10, 2022.

Do you have any questions about the attacks in Ukraine? Email dotcom@bellmedia.ca.