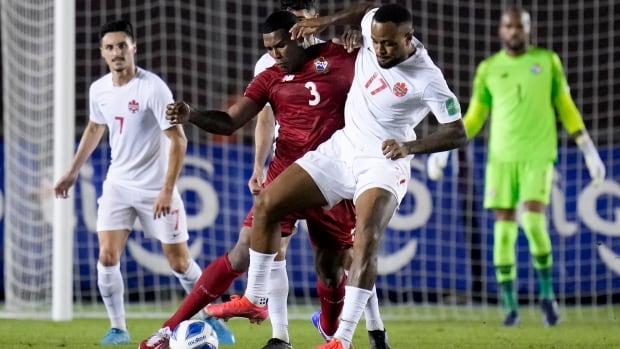 The Canadians finished a superb qualifying campaign Wednesday on a losing streak, beaten 1-0 by Panama in Panama City, but will still go to Qatar as top finishers in CONCACAF.

“And many more to come,” promised coach John Herdman.

“We have traveled thousands of miles,” he added. “We have played many minutes. We have kicked every ball. We never stop. And we are on our way to Qatar, No. 1 in CONCACAF. I will sleep well tonight.”

Despite the loss, the Canadians gathered on the pitch at the Estadio Rommel Fernandez after the final whistle to celebrate the final finish of the qualifying round-robin at CONCACAF, which includes North and Central America and the Caribbean.

Herdman said it felt “weird,” but also celebrated properly after a defeat that saw Canada’s equalizer denied for offside and Panama did their part to waste time as the clock ticked down.

VIEW | Canada qualified for the World Cup for the first time in 36 years:

“It was an amazing journey for this group of fans, [Canada Soccer] this organization and these players,” Herdman said. “And the work begins now, at all levels in the game. This is just the beginning of what we must do. And tonight was one of those brilliant learning experiences.

“It was a master class from Panama in the second half, just how to take at least a quarter of the game time. It was brilliant. So we have learned from that.”

There is much to celebrate.

Canada’s qualifying road begins March 25, 2021, when it opens the first round with a 5-1 win over Bermuda in Orlando. The Canadians were ranked 73rd at the time, climbing 40 steps in the rankings in a journey that has seen them play on the road in eight different countries.

They went 14-2-4 over three rounds in qualifying, outperforming the opposition 54-8.

VIEW | How Canada qualified for Qatar:

Here’s how CanMNT qualify for the Qatar 2022 World Cup

Two defeats have come in the last international window, starting with last week’s 1-0 loss in Costa Rica with Canada having to field one player for two-thirds of the game. Canada then secured World Cup qualification with Sunday’s 4-0 win over Jamaica in Toronto, letting their hair down for a day of celebration before returning to training.

The fight for a place in the World Cup

Costa Rica are fourth after winning all three games in the last international window and will face New Zealand No. 111 in the intercontinental playoffs in June. The All Whites beat 142nd-ranked Solomon Islands 5-0 on Wednesday morning in the final of the Oceania qualifying tournament.

On Friday, the Herdman squad will learn what awaits this November at the 32-team football showcase.

The 33-ranked Canadian is looking to finish first in the region and earn valuable FIFA ranking points that could help in Friday’s World Cup draw in Doha.

The four pots for the 32-team draw are divided by world ranking. Canada is hoping to move it from Pot 4 to Pot 3, which would allow for a more benign draw by avoiding the tier of the higher-ranked country. But that didn’t happen.

‘We have a better performance’

“I just felt we weren’t enough in our game,” Herdman said. “We had a better performance.”

It was a humid 27 C at kickoff, felt like 30 degrees. And it was a fighting affair with neither team on target in the first half.

The home side took the lead on the counter-attack in the 49th minute with Gabriel Torres, on his 100th appearance, hitting a perfect cross from Jose Luis Rodriguez. A cross past Kamal Miller with Torres guiding it home with his right foot past goalkeeper Maxime Crepeau into the top corner.

VIEW | Torres scored the only goal of the game:

Gabriel Torres scored in the 49th minute to give Panama a 1-0 win over Canada 1:22

Canada pressed on as the second half progressed with both teams finding more space to attack.

Canada thought they had equalized through substitute Cyle Larin’s header in the 80th minute but the goal was ruled offside after a video review.

With the Canadians pressing for an equaliser, Atiba Hutchinson’s backheel found Junior Hoilett and the veteran crossed to Larin in front of goal for what looked like his 25th goal for Canada. The Besiktas striker put his finger to his mouth to silence the crowd before kissing his badge in celebration.

But the celebration ended when referee Jair Maruffo went to the sideline monitor to check for offside. Canada continued to push forward during seven minutes of added time but could not score, with Larin’s header just wide from a free kick.

The Canadians top the region in their first participation in CONCACAF’s final qualifying round since leading to France ’98.

Herdman made seven changes to the starting 11 that secured Sunday’s qualification with a 4-0 win over Jamaica in Toronto.

Hutchinson returned as captain, playing at centre-back instead of his normal role in midfield, with Crepeau taking over as goalkeeper. Also in is Miller, Alistair Johnston, Ismael Kone, Lucas Cavallini and Mark-Anthony Kaye.

The initial 11 players came into the game with a combined 316 caps.

The 39-year-old Hutchinson collected the No. 95 cap, extending his Canadian men’s record. It was a first start for 19-year-old Kone, the CF Montreal midfielder who made his debut off the bench last week against Costa Rica.

Larin and Hoilett came on with half an hour remaining as Canada searched for an equaliser. Hoilett and Larin almost had their chances, joining to set up David’s cross in front of goal, only to see Panama goalkeeper Luis Mejia block the ball with his body.

Crepeau made a fine save in the 77th minute to stop Edgar Barcenas’ free kick from the edge of the box.

VIEW | Herdman the day after clinching a place at the World Cup:

Herdman’s record at the helm now stands at 29-8-4, with the only loss to the US (twice). Mexico (twice) Haiti, Iceland, Costa Rica and Panama. Men were ranked 94th in the world when Herdman took over in January 2018, moving away from the women’s program.

Panama, who like Canada and El Salvador had to survive two preliminaries to get this far, started the final stage in style with a 4-2-2 record that includes a win over the US and a draw with Mexico. But it won only one of its next five matches (1-3-1) leading up to the final against Canada.

Canada came into Wednesday’s game with a career record 4-1-6 against Panama, winning 4-1 when the two met Oct. 13 at BMO Field with Alphonso Davies scoring in an impressive solo effort. The only defeat came at the same venue as Wednesday night, a 2-0 loss in September 2012 in the 2014 Brazil qualifiers.