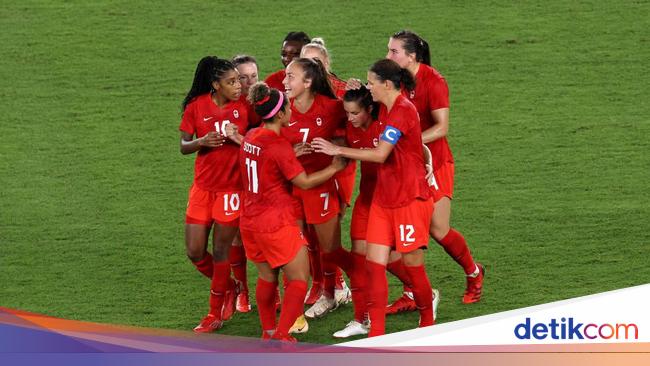 Playing at the Yokohama International Stadium, Friday (6/8/2021), Canada had a chance in the 7th minute through Vanessa Gilles’ header, taking advantage of a corner kick situation, but the result was still wide.

Sweden responded in the 10th minute through Magdalena Eriksson’s shot, but the result was also not on target. In the 17th minute, Fridolina Rolfoe’s long-range shot was saved by the Canadian goalkeeper, Stephanie Labbe.

Sweden re-press Canada in the 29th minute. There was Sofia Jakobsson’s header that almost went into goal, but Labbe again saved the net.

Sweden’s experiment finally paid off in the 34th minute. Kosovare Asllani stabbed in from the right, into the box, then crossed for Stina Blackstenius, who finished with a low effort against Canada. Goal!

Score 1-0 for Sweden lasted until the break.

In the second half, Sweden tried to regain control of the game. There was a chance from Filippa Angeldal in the 56th minute, but his long-range shot did not threaten the Canadian goal.

In the 65th minute, the Video Assistant Referee checked the possibility of a penalty for Canada, after Christine Sinclair allegedly violated Amanda Ilestedt in the Swedish penalty box. The result, the referee pointed to the white dot.

Jessie Fleming took the penalty kick, and managed to finish it well. The score is 1-1.

Desiree Scott almost brought Canada took the lead in the 70th minute, but his long-range strike failed to produce a goal. There were no additional goals until the long whistle was over, making the match continued into extra time of 2×15 minutes.

But during 30 minutes of extra time, both teams still failed to score. As a result, the determination of the gold medal was completed on penalties.

Nathalie Bjoern successfully equalized to make it 1-1. Meanwhile, Ashley Lawrence’s kick was pushed aside by Lindahl. The score remains 1-1.

Anna Anvegard failed to score for Sweden on the fourth kick. Likewise with Adriana Leon from the camp Canada.