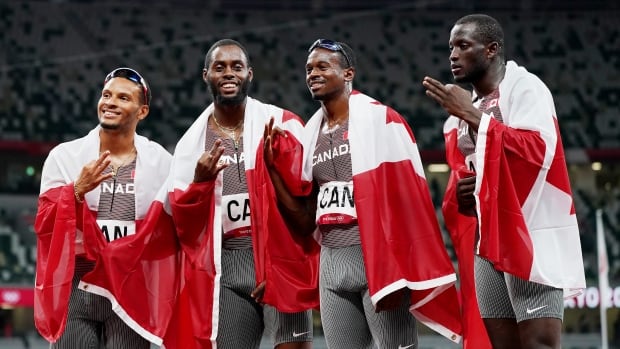 The Canadian men’s 4×100 meter relay team was upgraded to silver on Thursday when Great Britain, who finished second in the event, was asked to return its medal following sprinter CJ Ujah’s doping offence.

“We are delighted that the 4×100 meter athletes will receive the medals they earned, and we know their performance has inspired many during a difficult second summer of the pandemic,” Eric Myles, the Canadian Olympic Committee’s chief sports officer, said in a statement. to the Canadian Press.

“Despite the successful anti-doping process, it is disappointing that we are still seeing cases of doping taking away their athletes’ moments at the Olympics.

“We haven’t received a silver medal schedule yet.”

Ujah and the British squad are just 1/100th of a second behind the Italian champions (35.5 seconds). Canada, featuring Andre De Grasse, Brendon Rodney, Aaron Brown and Jerome Blake in the final, took bronze in 37.70 seconds.

A sample taken from Ujah after the race was found to contain the banned substances ostarine and S-23, which are muscle-building selective androgen receptor modulators. Ujah’s claim that he unknowingly ingested the substance was later rejected.

“It is with great sadness that we have to ask for medals, certificates and pins back, especially for the three athletes who were impacted through no fault of their own,” said Andy Anson, CEO of the British Olympic Association. “However, this is [Court of Arbitration for Sport] decide and we have to abide by it, as we have explained that must happen to other countries whose athletes have violated doping rules.”

Seventh silver for Canada in Tokyo

China, who placed fourth in the event, is expected to be upgraded to bronze.

Along with seven gold medals, Canada can now claim seven silver and 10 bronze medals from Tokyo 2020, for a total of 24 podium appearances.

This is the second silver medal in De Grasse’s Olympic career, and the Scarborough, Ontario native now has medals of every color from Tokyo. He also won gold in 200 meters and bronze in 100 meters.

Britain has only twice previously lost an Olympic medal – both bronze. Judoka Kerrith Brown tested positive for a diuretic at the 1988 Seoul Olympics – after admitting she was unaware the substance was banned – and the banned stimulant methamphetamine was detected in a sample of skier Alain Baxter at the 2002 Salt Lake City Winter Olympics after he used a nasal inhaler.

The process for upgrading medals after a doping offense can be exhausting.

Canada’s Dylan Armstrong finished fourth in stroke at the 2008 Beijing Olympics and has therefore never been on the Olympic medal podium. Years later, he was upgraded to bronze after Andrei Mikhnevich of Belarus was disqualified for doping.

Armstrong finally received his medal—Canada’s first stroke at the Olympics—at a ceremony in his hometown of Kamloops, BC, in 2015, seven years after the actual competition.