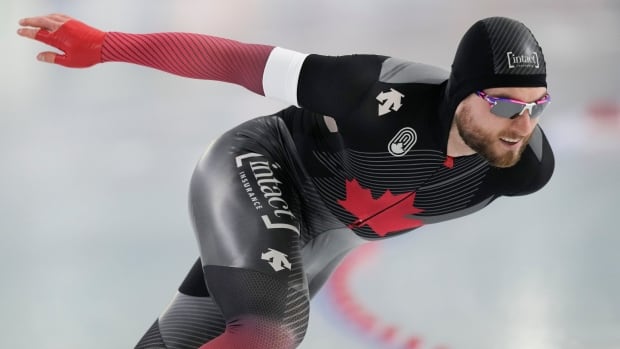 Canadian speed skater Laurent Dubreuil finished fourth in the 500 meters on Sunday in Heerenveen, Netherlands, but it was more than enough to secure the title of his first overall World Cup season.

Japan’s Tatsuya Shinhama, who won Saturday’s race, also took victory in Sunday’s event in 34.487 seconds, but was unable to catch up to points leader Dubreuil.

The Canadian finished 15-100 seconds behind Shinhama but ended up with an insurmountable points total of 614, while the Japanese skater 586.

“My goal this weekend is to continue to maintain my position at the top of the overall standings,” Dubreuil told Speed ​​Skating Canada. “I was leading well before this competition and knew that my preparation had not been ideal.

“It has been a goal throughout my career to reach first place in the World Cup classification and I am very proud to have achieved it this year. It is truly a Cinderella story that ended with some difficult weeks.”

Dubreuil won silver in the men’s 1,000 at the Beijing Olympics last month, after a disappointing performance in his flagship event. He finished fourth in the 500 in Beijing, the only time all season he missed a podium at a distance.

Laurent Dubreuil of Levis, Que., finished fourth in his 500 meters race, but could still claim the overall season championship. 1:53

Canada’s Ivanie Blondin was overtaken at the finish line for both the bronze medal and the overall title in the final mass starting event of the season.

The Ottawa native, who won Olympic gold alongside teammates Isabelle Weidemann and Valerie Maltais in a team chase in Beijing last month, enters the race with a 34-point lead over nearest competitor Francesca Lollobrigida of Italy.

The Italian took 21 sprint points to Blondin’s 12, and crossed the finish line seven hundredths of a second ahead of the Canadian to finish with the bronze medal. That gave Lollobrigida the points she needed to leapfrog Blondin for the season title.

Fellow Canadian Connor Howe posted a bronze medal performance in the final 1,500 men’s race of the season. That helps Canmore, Alta. athlete for a career-best second overall finish in the season standings, behind Joey Mantia of the United States.

“It’s very special to skate in front of so many people, especially because it’s not been possible in the last two seasons,” Howe said. “Finishing the season second overall means there is consistency for me, which is motivating and exciting for next year.”

In his Olympic debut, the Canadian speed skater finished 5th in the men’s 1500m #Beijing2022 pic.twitter.com/FsBZvwb9L6

Howe, who studied mathematics at the University of Calgary with a major in urban planning, qualified for the 1,500 Olympics based on the World Cup’s top eight rankings after four events. On December 11, he clocked 1:42.42 — 13-100 seconds faster than his previous best — to win a silver medal at his home track in Calgary and move up to third in the standings.

A year ago, Howe won team pursuit silver at the world singles distance championships in Heerenveen, Netherlands, where he finished sixth in 1,500 after a 19th-place performance in 2020.