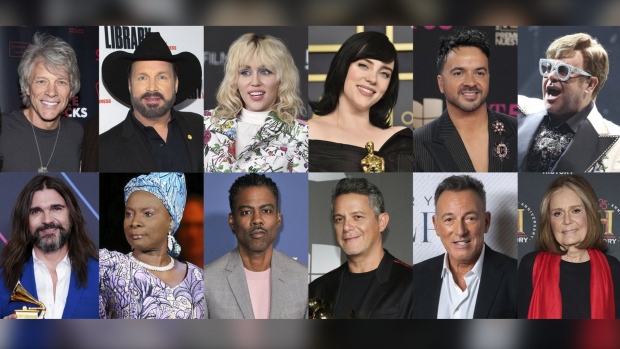 The social media rally hosted by Global Citizens on Friday urged governments, institutions, companies and individuals to help fund humanitarian efforts in Ukraine and other regions of the world. Celebrities were asked to use their social media accounts to publicize the effort, using the hashtag #StandUpForUkraine.

Springsteen posted a video on social media Friday to show his support: “Refugees in Ukraine and around the world need our help now,” he said. “Everyone has the right to safe and humane living conditions.” Barbra Streisand tweeted a link to Global Citizen and wrote: “I support and hope you do too.”

Celine Dion took to Instagram to upload a support video with captions in English and French saying: “I call on world leaders to help all those who have been forced to leave their homes.” Ellen DeGeneres in her own video urges world leaders to “do the right thing and donate the billions they need.”

Lenny Kravitz posted a photo of himself on Twitter holding a sign that read in part, “Let love rule, not war.” Ozzy Osbourne and his wife, Sharon, posted a video of support and plea: “We ask everyone who is seeing this to strengthen this call.”