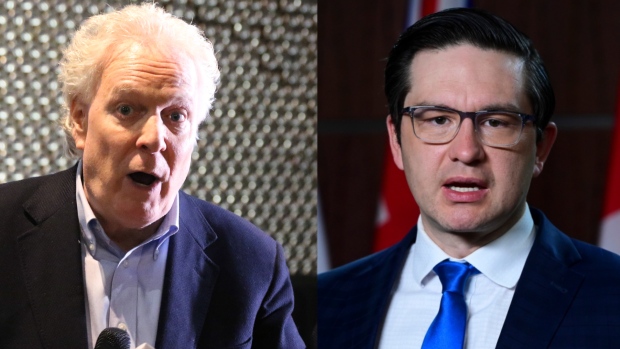 Canada’s Conservative Party leadership rival Pierre Poilievre is more attractive to voters who have previously cast their support behind his party and the Canadian People’s Party (PPC), while his rival Jean Charest is attracting centre-left voters, who are new. Angus Reid Institute Survey say.

According to the survey, 54 percent of respondents who voted for the Conservative Party last fall, and 74 percent who voted for PPC Maxime Bernier, said Poilievre’s candidacy in the race appealed to them.

Meanwhile, 32 percent of respondents who voted for the incumbent Liberal and 19 percent of previous NDP voters said Charest was the most attractive candidate.

For the third time in five years, the Conservative Party is in a leadership race to determine who will navigate the base after Erin O’Toole’s ouster.

The deadline for applications is June 3, with the party scheduled to elect a new leader on September 10.

The Angus Reid survey compared the overall popularity of Poilievre, Charest, Lewis, and Brown, noting that between March 10 and 15 respondents listed Poilievre as the most attractive candidate with 25 percent, followed by Charest 20 percent, Lewis 14 percent. percent and Brown at six percent.

Then narrows in Poilievre and Charest.

Regionally, the former is gaining popularity in Alberta and Saskatchewan, while the latter has a slightly wider appeal in Ontario. The two went head-to-head in British Columbia, Charest beat Poilievre in Atlantic Canada, and Poilievre had a narrow lead in Quebec.

The survey also found that both Poilievre and Charest had the ability to increase party support by about 42 percent in federal elections. In the 2021 election, the Conservatives won more than 35 percent of the vote, while the Liberals won 47 percent.

“Poilievre got there by inspiring and rallying the core Conservative base today, along with voters who turned to the PPC in the last election. For Charest, the route hinges on convincing past centrist voters to see a more moderate Conservative Party under his leadership,” the survey said.

The Angus Reid Institute conducted an online survey from March 10-15, 2022 among a representative random sample of 5,105 Canadian adults who are members of the Angus Reid Forum. For comparison purposes only, a probability sample of this size will carry a margin of error of +/-2 percentage points, 19 times out of 20. Differences within or between totals are due to rounding. This survey was self-administered and funded by ARI.