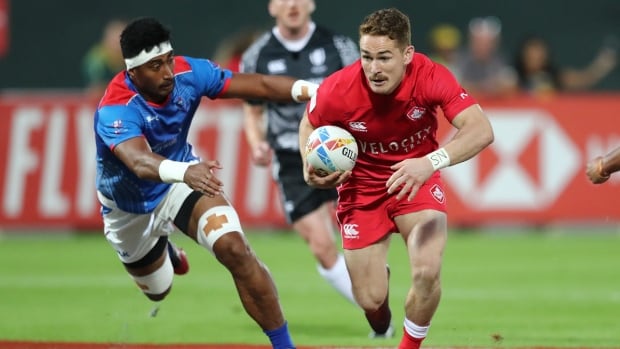 Cooper Coats did not play rugby until he was in grade 12 at Citadel High School in Halifax, and is known for his skills on the soccer field at Acadia University.

Fast forward eight years and Coats is now one of the leaders of Canada’s seven men’s rugby team.

“Back in high school I went to a few training sessions and then played a few games and I ended up falling in love with that,” said Coats, during a day off from training with the national team in Victoria.

Rugby sevens became an Olympic sport in 2016 in Brazil. With only seven players per team on the field at any one time, instead of the traditional 15, this is a very physically demanding sport. If you are not fast and strong, the game will not go well for you.

Coats have both physical attributes.

“It’s really fast with a lot of running, which makes a lot of highlighting,” said Coats, 25. “It makes it really fun for people to watch.”

Coats picked up a knee injury in January as Canada played in four tournaments in Dubai and Spain. Arthroscopic surgery has repaired his knee and he is now undergoing rehabilitation and training with his national teammates in Victoria.

He is unlikely to play in the upcoming three events next month in Singapore, Vancouver and the Bahamas. But he plans to be ready for the rest of the summer including the Rugby World Cup Sevens in Cape Town, South Africa.

“He’s really been on an incredible journey and he’s an incredible story,” said Jack Hanratty, the provincial rugby coach in Nova Scotia who coached Coats for several years. Within six months of picking up rugby ball for the first time, Cooper put on a maple leaf and played for Canada’s Under-18s on a tour through Romania, which was a huge achievement.

Hanratty, now coach of the Canadian women’s national team, said Coats was the limit, having just reached the pinnacle of her rugby career.

Coats have captained Canada in their last two tournaments.

“I’m honored to be in charge of those two weekends,” Coats said. “I’m really proud to be the only player on the current team from Atlantic Canada, so it’s been great to wear the captain’s armband and represent the team.”

Coats wrote the letters NS on the band he wears on his wrist so everyone knows where he’s from.

Many veteran players have moved on from the Canadian team. Coats is leading a new group of young players, and he hopes they can qualify for the Olympics in Paris in 2024.