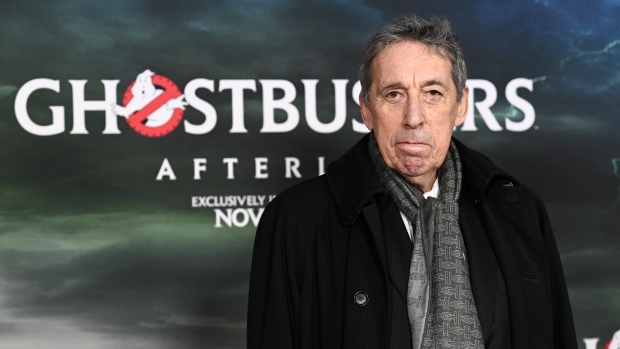 Ivan Reitman’s work, which ranges from the frathouse antics of “Animal House” to the supernatural laughs of “Ghostbusters,” reshapes big-screen comedy with distinctly Canadian inflections, colleagues and contemporaries say.

The Toronto-raised filmmaker and producer’s influence on Canadian entertainment lives on through the philanthropy and family dynasty he led, they say, as well as his lasting influence on a generation’s sense of humor.

Reitman died peacefully in his sleep Saturday night at his home in Montecito, California, his family told The Associated Press. He is 75 years old.

News of his death sparked an outpouring of tributes on Monday, including from his son, director Jason Reitman, who mourned the loss of his “hero.”

“All I want is a chance to tell my dad one more story,” tweeted the younger Reitman, who inherited his father’s supernatural comedy franchise as director of 2021’s “Ghostbusters: Afterlife.”

“He came from a family of (Holocaust) survivors and turned his legacy into laughter…. Enjoy the film and remember his storytelling talent. Nothing could make him happier.”

Born in Slovakia, the older Reitman and his family came to Canada as refugees in 1950 when he was four years old. He studied at Hamilton McMaster University, where he began directing several short films before moving to Los Angeles.

A screen and stage director and producer, Reitman first made his mark on the big screen as producer of two films by Canadian horror master David Cronenberg, 1975’s “Shivers” and 1977’s “Rabid”.

But Reitman’s influence is most prominent in producing classic Hollywood comedy films.

He rose to prominence by producing 1978’s “National Lampoon’s Animal House” and then directing a series of other comedies, including “Meatballs,” “Stripes,” the first two “Ghostbusters” films, and “Kindergarten Cop.”

Elan Mastai vividly remembers seeing “Ghostbusters” for the first time at the Vancouver theater in 1984 – and then seeing it again every weekend after that for a total of 14 screen views that summer.

The screenwriter and producer of “This Is Us” says he’s watched the film countless times in the decades since, and to this day, he marvels at how the jokes get funnier with each rewatch.

“He had what we think of today as a very classic directing style, but that’s because his films set the template for what we consider to be successful and effective comedies,” Mastai said.

He credits Reitman with mainstreaming a Canadian comedy style that emphasizes compassion over cruelty while maintaining “cynical indifference in the face of absurdity.”

“He was one of the key figures that gave Canadians confidence in the global appeal of our comic sensibilities,” Mastai said, adding that Reitman helped carve a path for Canadian creatives looking to maintain their connection to their home country while striving for Hollywood success. .

Canadian actor and writer Jack Blum, who played Spaz in the summer camp comedy “Meatballs,” remembers Reitman as the perfect collaborator who gave his actors the freedom to find the best laughs.

“He’s very, very loose – great sense of comedy. He gave us a lot of freedom. We will develop the script together,” said Blum, who is now the executive director of Reel Canada.

“Ivan’s real comfort and ability to make people shine, do what they want to do and have fun doing it… is a real warm and nostalgic feeling. And it’s also because we all have times in our lives, and he records them.”

Canadian actor-comedian Dan Aykroyd, one of the original “Ghostbusters,” called Reitman a “friend, collaborator, champion, and one of the last great creative talents of the big screen era.”

“Now on Thursday, who will I call?” Aykroyd said in a statement to The Canadian Press.

Kumail Nanjiani, Mindy Kaling, Rainn Wilson, Judd Apatow, Paul Feig and Ron Howard were among the celebrities paying homage on social media, many citing Reitman as a formative influence on their own comedic style.

Arnold Schwarzenegger, who worked with Reitman on “Kindergarten Cop,” “Twins” and “Junior,” says the director helped him escape being pigeonholed as an action hero by seeing the comedic potential behind his muscular physique.

“I know I can make it in comedy, but I need someone else to know to make it happen,” Schwarzenegger said in a statement on social media.

“That’s why Ivan is such a great director and friend: he can see things in you that no one else sees, and he can help you show them to the world.”

Toronto International Film Festival CEO Cameron Bailey remembers Reitman as a Canadian legend whose brand of humor transcended the boundaries and boundaries of what was considered good taste at the time.

“(Her) is a certain brand of comedy, very anarchic, a bit wild, unruly, but that’s what that generation wanted,” Bailey said in an interview. “A lot of the movies we see today and the style of comedy that comes out of Hollywood can be traced back to Ivan Reitman.”

Bailey also hailed Reitman as a champion of Canadian cinema, noting that he donated the land on which the TIFF Bell Lightbox is located.

“He understands what we’re trying to do, to get the film out of the commercial mainstream,” Bailey said.

Reitman is married to Quebec actress Genevieve Robert, with whom he has three children – Jason, Catherine and Caroline.

Jason Reitman honed his own cinematic blend of comedy and drama with award winners including 2007’s “Juno” and 2009’s “Up in the Air” which he co-produced with his father. Other directing awards include “Young Adult,” “Tully” and “The Front Runner.”

His younger sister, Catherine Reitman, is an actress, comedian, producer, writer and director. She is the creator and star of the CBC parenting comedy “Workin’ Moms,” which debuted in 2017 and has been nominated for several Canadian Screen Awards and International Emmys.

This report by The Canadian Press was first published on February 14, 2022.