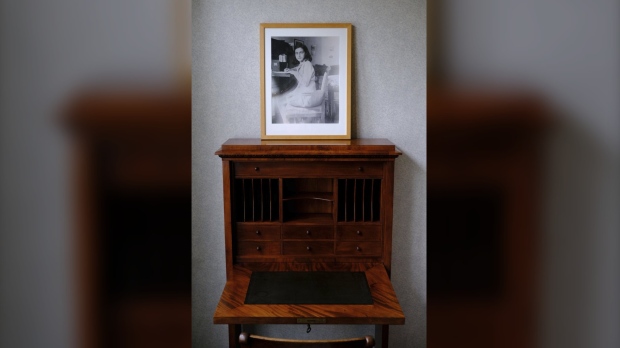 THE HAGUE, Netherlands (AP) – The publishers of a new and controversial work on Anne Frank withdrew the book after a group of Dutch historians issued an in-depth critique of the “most likely scenario” of who betrayed the Jewish teenage diary writer and his family in German-occupied Amsterdam. during World War II.

Meanwhile, US publisher “The Betrayal of Anne Frank: A Cold Case Investigation” announced Wednesday that it will continue selling the book.

The team’s cold case study, published earlier this year in a book by Canadian academic and author Rosemary Sullivan, was immediately criticized in the Netherlands.

In its 69-page “rebuttal,” six historians and academics described the cold case team’s findings as “a shaky house of cards.” The book’s Dutch publisher, Ambo Anthos, reiterated its earlier apology and announced Tuesday night that it was withdrawing “The Betrayal of Anne Frank.”

The book alleged that the person who revealed the location of the secret hiding place of the Frank family’s annex was most likely a prominent Jewish notary, Arnold van den Bergh, who disclosed the location in the Amsterdam canal-side building to German invaders to save his own family. from deportation and death in Nazi concentration camps.

Dutch historians reviewed the team’s work and concluded that “the allegations are groundless.”

Historians say the book “shows a distinct pattern in which assumptions made by the CCT (Cold Case Team), are deemed correct a short time later, and then used as building blocks for the next step in the logic circuit. This makes the entire book a wobbly house of cards, because if one move turns out to be wrong, the cards above will also fall down.”

In response, the cold case team leader, Pieter van Twisk, told Dutch broadcaster NOS that the historian’s work was “very detailed and very solid” and said it “gives us some things to think about, but for now I don’t see that Van den Bergh can be definitively removed as the prime suspect.”

Since the book was published in January, the team has published detailed reactions to criticism of its work on its website.

Dutch filmmaker Thijs Bayens, who had the idea of ​​forming a cold case team, admitted in January that the team did not have 100% certainty about Van den Bergh.

“No smoking guns for indirect treason,” Bayens told The Associated Press at the time.

Not all publishers drop the book. In the US, HarperCollins Publishing issued a statement saying it supported the “Betrayal of Anne Frank,” adding that “While we recognize there has been some criticism of the findings, the investigation was conducted with the utmost respect and care for a case of a very sensitive theme.”

The Franks and four other Jews hid in the pavilion, which was reached via a secret staircase hidden behind a bookshelf, from July 1942 until they were found in August 1944 and deported to a concentration camp.

Anne and her sister died in the Bergen-Belsen concentration camp. Anne is 15 years old. Only Anne’s father, Otto Frank, survived the Holocaust. He published his diary after World War II and it quickly became an enduring symbol of loss and resilience, read by millions around the world.

Ronald Leopold, director of the Anne Frank House museum based in the building where the Franks are hiding, said in January that there were still “many pieces of the puzzle missing. And those pieces need to be investigated further to see how we can judge this new theory.”

On Wednesday, Leopold said the question marks the museum had in January about the cold case team’s conclusions “are backed up by counter-examination from leading historians. You can’t go down in history as a traitor to Anne Frank if you don’t have convincing evidence. We hope that this counter-investigation clears Van den Bergh’s name of wrongdoing, as well as for his relatives, including the granddaughter of Mirjam de Gorter.”