Get to know GLOBL JAM, the ‘ambitious’ part of the Canadian Basketball plan 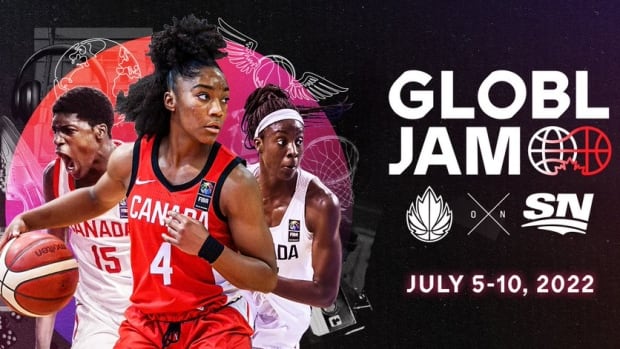 GLOBL JAM, the new event that Canada Basketball announced on Tuesday, has been Michael Bartlett’s main concern for a while now.

“It was kind of a Day 1 conversation for me,” Bartlett said. “It was clear to me when I interviewed to join Canadian Basketball over last winter that this was the goal of the organization.”

Taking place from July 5-10 in Toronto, GLOBL JAM is an international U-23 basketball invitational tournament for both men and women.

Canadian Basketball and @Sportsnet bringing the world to Toronto this summer when we launch GLOBL JAM, a week-long celebration of basketball, culture and community.

Canada’s national 3X3 tournament will also be held at Yonge-Dundas square and will feature celebrations “that celebrate the intersection of sport, art and culture,” according to a statement released by Basketball Canada.

Canadian Basketball has historically had financial problems—attracting local NBA stars to play for the men’s national team has been expensive in the past due to high insurance costs—but if GLOBL JAM is successful, it could become a major revenue generator for Canadian circles.

“That’s where every dollar we raise online is going back. It makes us competitively better off,” said Bartlett.

GLOBL JAM is an extension of the partnership between Basketball Canada and Sportsnet that started last February.

The two entities split the costs on the event mutually beneficial as it receives national coverage on Sportsnet while providing content to the network.

“[GLOBL JAM] is an important way to strengthen our commitment and investment in developing the game of basketball in Canada and provide fans with more entertaining content that showcases the sport they love,” Sportsnet president Bart Yabsley said in a statement.

The men’s competition will feature hosts Canada. USA, Brazil and Italy, while the women’s tournament will pit Canada against the US, Belgium and France.

Despite being a FIBA-approved event, the U-23 tournament format itself is a bit odd as FIBA’s age group typically limits the “U-19s” and then jumps to the senior level.

The tournament aims to fill the gap

Canadian Basketball saw a gap that needed to be filled and created the Under-23 category to feature young, developing professionals.

“Through this joint venture, we are able to provide a platform for these men and women to showcase their skills – at least before they reach the professional scene – and help make Canadian basketball talent household names,” said Yabsley.

As part of the deal to play at GLOBL JAM, all participating athletes—not just Canadians—are expected to do some community outreach work, such as assisting a basketball clinic, during the week of the event.

The GLOBL JAM matches will be held at Ryerson University’s Mattamy Athletic Center. Canada Basketball hopes to make it an annual event with the possibility of touring around the country in the future with stops in Montreal, Halifax, Vancouver and Edmonton.

The timing of this year’s GLOBL HOUR proved to be quite a coincidence for Canadian Basketball.

The senior men’s national team are scheduled to play World Cup qualifying matches between June 30 and July 4, with the location still to be determined.

Bartlett said his organization was hard at work trying to see if Canada could host the qualifiers, something that would be the perfect start to his new basketball festival.

“It would only be the cherry on top if we could pull it off,” said Bartlett. “I don’t know if it’s possible, but we’re ambitious in Canadian Basketball right now.”