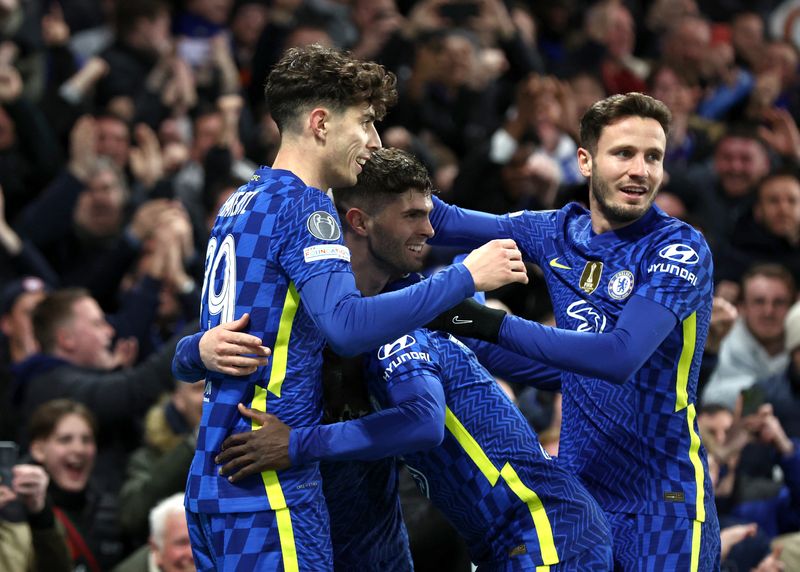 LONDON (Reuters) – Goals from Kai Havertz and Christian Pulisic gave reigning European champions Chelsea a 2-0 win over Lille in the first leg of their Champions League last-16 tie on Tuesday but the Londoners suffered injuries. to key players.

Havertz, who had two early chances, headed home after a corner from Hakim Ziyech in the eighth minute and the ball bounced high from the yard into the net.

Chelsea left striker Romelu Lukaku on the bench and Pulisic scored the second goal, in the 18th minute of the second half, with a fine finish after N’Golo Kanté’s move.

French champions Lille, who topped their qualifying group ahead of Salzburg, Wolfsburg and Sevilla, kept Chelsea on their toes with fine play from Renato Sanches, Benjamin André and Jonathan Bamba.

But the efforts of the trio and Canadian striker Jonathan David were blocked by defender Thiago Silva or easily accommodated by Edouard Mendy in the Chelsea goal.

Chelsea, who face Liverpool in Sunday’s League Cup final, are now two goals clear of Lille for the return leg on March 16. But they will be concerned about the physical condition of midfielders Mateo Kovacic and Ziyech, who left the pitch injured early in the second half.

+ After saying that Gusttavo Lima is the father of his daughter, women can be sued

+ One twin becomes vegan, the other eats meat. Check the results

+ See which cars are the most stolen in SP 2021
+ The expedition identified the giant squid responsible for the sinking of the ship in 2011
+ US agency warns: never wash raw chicken