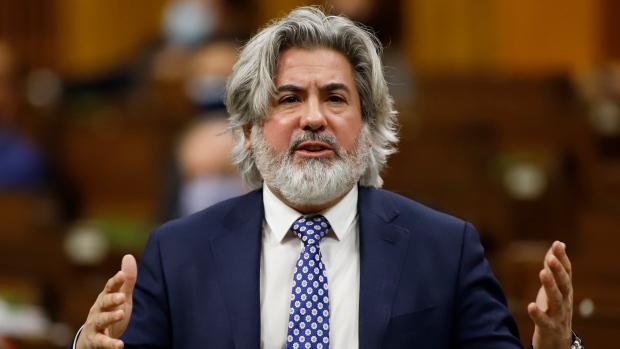 In Wednesday’s debate in the House of Commons on a bill to regulate online streaming, Rodriguez said updates to the broadcasting law were long overdue and needed to cover commercial content on social media and streaming platforms.

He said the last time the law was updated was in 1991, people were taking videos of Blockbusters and listening to the Walkman.

The new law will regulate online streaming platforms as well as traditional Canadian broadcasters who already have an obligation to provide Canadian content.

Rodriguez said he would like to see the creation of more Canadian programs to promote local talent, such as CBC’s “Schitt’s Creek” and “Anne with an E,” which also air on Netflix.

But he says he is “flexible” about how streaming platforms contribute to Canadian culture, and they can use different models including putting money into a fund.

“Amazon, Netflix and Disney are already investing in Canadian content and we love that. It’s very entertaining,” he said.

But he said Canada has extraordinary talent and would like to see streaming services invest more in Canadian films, TV and music.

“Our system also has to pave the way for new and up-and-coming Canadian artists,” he said.

He also said Canadian natives, people with disabilities and racial groups, as well as people from the LGBTQ community, “deserved to have space to tell their stories.”

Speaking at the second reading of the bill, Rodriguez said he had “corrected” concerns raised by critics of the previous version of the law that it would suppress people watching or creating content for social media platforms.

The bill’s version failed to become law before the election after concerns were raised that social media influencers or people who upload homemade videos to YouTube could be influenced by it.

Rodriguez said Canada’s Radio-Television and Telecommunications Commission, which will be responsible for regulating online streaming platforms as well as traditional broadcasters, “would not have the power to regulate Canadians’ everyday use of social media.”

But the Conservatives said there were still concerns that the law could apply to people using and posting content on social media. John Nater, a critic of the Tory heritage, said “this ‘trust us’ approach does not inspire trust.”

He also said there were questions about the definition of Canadian film and TV production.

The Conservatives will not support the bill on its second reading but will make amendments when scrutinized later by a House of Commons committee, he said.

In an interview with The Canadian Press, Rodriguez said the bill would help Canada’s creative industries a lot, including French-Canadian music and film.

He said the government listened to concerns about the regulation of public social media content, such as “cat videos”, and had “fixed the problem.”

Rodriguez said he consulted many online influencers and content creators, adding that they were “amazing people … and some of them made a lot of money – but this bill isn’t about them.”

He said only exclusive commercial content – for example, professionally produced songs on YouTube that are also available on Spotify – would be affected.

But he said the law needed to be updated because “two-thirds of Canadians listen to their music on YouTube.”

“If you find a The Weeknd song on YouTube and you find the exact same song on Spotify, then it should be treated the same,” he said.

Rodriguez said the new law would raise more money for Canada’s creative industries from streaming platforms but would provide “flexibility” for companies like Netflix and Disney to provide input on how they contribute because they operate differently.

“What we set are goals and how they will achieve those goals will depend on discussions and negotiations.”

Some online platforms may commit to creating a percentage of Canadian content and others may contribute to a fund which will then be distributed to Canadian artists and content creators.

The minister said he was optimistic that the Quebec Bloc MPs and the NDP would support the bill.

This report by The Canadian Press was first published on February 16, 2022.