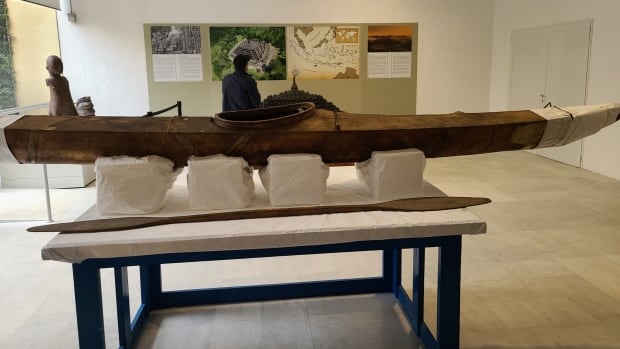 Many of the Indigenous delegates who met with the Pope this week completed a private tour of the Vatican Museums yesterday disappointed, but the leader of the Inuit delegation said he was told by the curator of the Ethnology Museum that the Vatican was open to returning the treasured cultural items in his possession.

Natan Obed, president of the Inuit Tapiriit Kanatami (ITK), met with Father Nicola Mapelli for several hours at Obed’s request after touring the museum, including the Sistine Chapel and several Indigenous cultural objects from Canada in the new location. Anima Mundi Pameran Exhibition which has not been opened to the public.

“The curators are quite open with any scenario we propose, including repatriation,” Obed said.

“Nothing is wrong, as they tell us.”

Delegates only saw a portion of the Vatican’s Indigenous collection of goods, including a rare century-old kayak from Inuvialuit in the Arctic West.

ITK board member Duane Smith, who is also chairman and CEO of Regional Company Inuvialuit, has asked the Vatican to return the kayaks to Inuit.

During Obed’s conversation with Mapelli, the curator talked about how the Vatican Museums work with a number of different Indigenous Peoples, most recently in Australia, to decide what is best for Vatican possessions, Obed said.

The background of how the kayaks got to the Vatican is still a mystery.

The Vatican says it was sent for exhibition in 1925, along with tens of thousands of works of Indigenous culture from around the world, but questions about who made it, from which community and whether it was given away remain unclear.

Obed doesn’t know all the details but was told it was part of a call for examples of cultural expression against fascism, nazism and racism in the early 20th century.

“It looks beautiful,” said Obed. “It’s a great expression of our culture and expertise, and it’s great to see.”

Indigenous leaders reflect on talks with the Pope

Two leaders of the Indigenous delegation in Rome described their experience of meeting Pope Francis for historic reconciliation talks and what they hoped would emerge from the discussions. 6:10

Mapelli has several records showing that the kayak came from Edmonton before going to Vatican City by boat across the Atlantic Ocean and showed no signs of wear and tear once it arrived.

Obed said further conversations needed to be made about what was going on next to kayaking and other cultural works, which included linking Mapelli to Smith.

“I hope that the best decisions can be made about these pieces, which are important,” Obed said.

Other delegates, eager to see their cultural works repatriated, were disappointed with the way the Vatican presented their history and demanded to be involved in future decision-making.

No mention of housing schools at the Indigenous exhibition

First Nations delegate Norman Yakeleya, whose traditional last name is Yakeula, of the Dene Nation in the Northwest Territories said he was disturbed after seeing the sacred ceremonial pipe on display by the Vatican.

“I’ve been told by several elders that it’s not for show,” said Yakeleya. “It was there on display and it was something I didn’t like.

Yakeleya said artifacts should be returned to their rightful owners: ceremonial people.

“They can make a plastic model if they want, but give us the real thing,” says Yakeleya.

“By God, give them back to our people.”

When he walked to the school door at the age of five, he was given a number placed on his shirt and glasses.

One of the numbers assigned to him during the eight years he attended Grollier Hall was 153.

“If they called 153, I had to raise my hand, and that’s how they identified me,” Yakelaya said.

“In what world would they do that to a human?”

VIEW | Cultural significance of Indigenous artifacts in the Vatican Museums:

Curator and professor Gerald McMaster, explains to Ginella Massa of Canada Tonight why the Indigenous artifacts in the Vatican museums are so important to Indigenous people and to the reconciliation process. 6:40

“They don’t show the history of why we are here,” Yakelaya.

“A lot of people go to the Vatican museums, but they also have to know there’s a dark side they have to uncover.”

Vatican Museums officials said in a statement that management “chooses not to respond” to inquiries about Indigenous cultural items in the museum’s possession.

But the Canadian Bishops’ Conference said Mapelli spoke to delegates about his desire to work with them to learn more about artifacts from Canada, seek their guidance on what to return to local communities, and what to share with the seven museums. million annual visitors.

Cassidy Caron, president of the National Council of Métis (MNC), asked the Canadian Bishops’ Conference prior to the trip to Rome to work with the museum to obtain a list of all Indigenous artifacts but did not receive it.

“I feel pretty ready to go in there,” Caron said.

“When we arrived, really, I was quite disappointed… We didn’t get a chance to go and find our article and start identifying what might actually be there.”

There is no glass to protect the items and little information to explain the story behind it.

Caron said MNC wanted to catalog all items and identify community members who could tell the story behind the cultural items and the pathways to take them home if that was what their community wanted.

“It makes me feel so empty and unfulfilled,” says Caron.

One of the museum directors kept repeating to delegates that the cultural objects do not belong to the Vatican but the museum is the custodian of them, Caron said.

“I kept thinking, ‘Why can’t we be the custodians of our own stuff?'” she said.