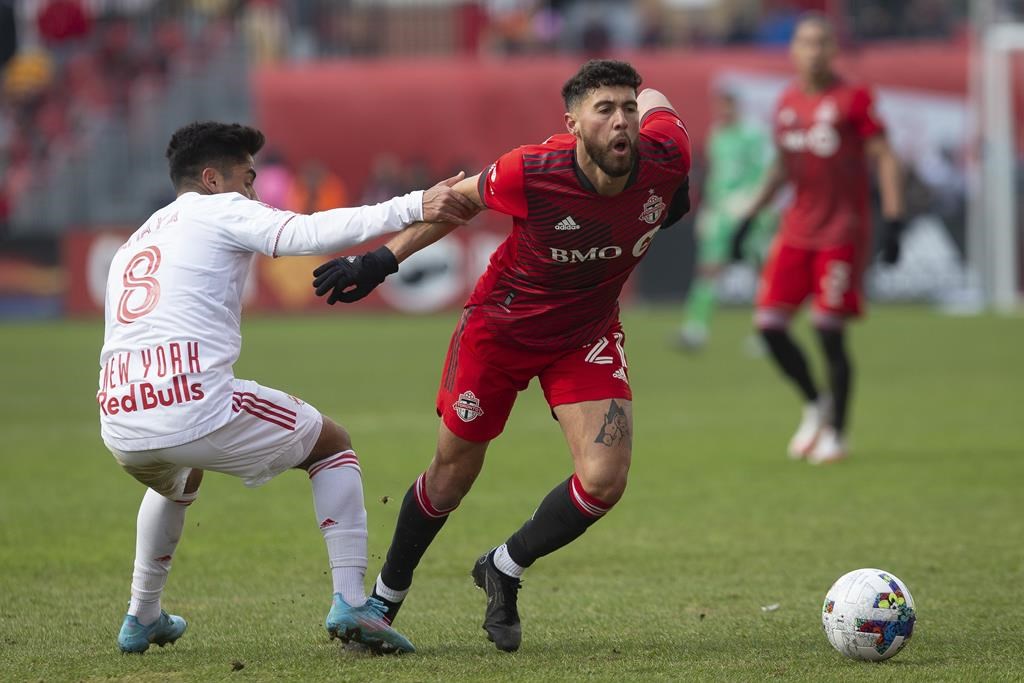 TORONTO — Jonathan Osorio remembers watching on TV as Canada beat Colombia to win the 2000 CONCACAF Gold Cup. He was seven years old at the time.

“I vividly remember that day,” said the Toronto FC midfielder. “Seeing Canada win was an inspiration, of course.”

With 52 caps to his credit, 29-year-old Osorio is now inspiring a new generation of Canadians, including many young talents who grew up on their own at his hometown MLS club.

However, he did not forget the past. Osorio cites Julian de Guzman, Paul Stalteri, Jim Brennan, Craig Forrest and Jason Bent as some of the players he admires.

“And of course, Atiba Hutchinson, in my opinion, is a reference for everyone especially for my generation,” he said of the Canadian evergreen captain.

“We have successful people in Europe,” he added. “Perhaps it was a more difficult path for them to get to where they are now and it got easier as the generations went on. Not to say that it’s easy now because it’s still hard for us Canadians. But now it’s easier than ever.

“I value the past. I always respect the past. I respect history and I respect all those people. I keep an eye on them and they are the ones you want.”

Osorio moved to Uruguay as a teenager to pursue his football dreams. He spent two years at Club Nacional in Montevideo, starting from the Under-19 team before breaking into the reserve team. He returned home in late 2011, earning an invitation from the TFC academy in September 2012.

Former manager Ryan Nelsen liked what he saw of Osorio in training camp in 2013. Currently the player known as Oso leads the club with 295 appearances in all competitions,

While Osorio prepares for next week’s international break — and Canada’s three remaining CONCACAF qualifiers to ensure qualification for Qatar 2022 — he is surrounded by the next generation at Toronto FC. Many will line up alongside him Saturday when Toronto (0-2-1) host DC United (2-1-0).

Nelson has won three caps for Canada while Chung, Okello, Marshall-Rutty, Perruzza, Petrasso and Priso have experience in the Canadian youth ranks. MacNaughton represented Canada at the University Games.

Marshall-Rutty and Priso both accepted invitations to Canada’s senior camp.

In trying to incorporate TFC’s revamped roster, Bradley is giving youth a chance while waiting for summer reinforcements. That means adjusting expectations, to some degree.

“I think experience comes into play when you get into the game,” said Bradley. “There are situations in a game where if you’ve seen it before and if you have an idea of ​​what might happen, your ability to be on top of things, react more quickly, make good decisions — all of that improves.

“When you have a younger group then you just try to help them through the process so they pick things up quickly and nothing surprises them on the pitch.”

The correct test would be a longer sample size.

“I think there’s always some kind of fascination with young players and you dream of what can come,” said team president Bill Manning before the home opening. “But I always remind that the body of work is really at the end of the day and (in) the results.”

“Listen, I’m excited for these young people too. But I’m a bit cautious because I want to make sure in the long term (that) you can look back and say ‘OK, he delivered,’” he added.

Toronto opened the season with a 1-1 draw at FC Dallas before losing 4-1 to the visiting New York Red Bulls and 2-1 at Columbus.

First win for Toronto this season – and No. 183 for Bradley in an MLS regular season game – would be welcome for many reasons.

This will help shake off the hangover lingering from last year’s 6-18-10 season, with Toronto currently mired in a nine-game winless streak (0-5-4). TFC’s last league win came on October 3 in a 3-1 decision over the visiting Chicago Fire.

DC United are part of TFC’s current winless streak, beating Toronto 3-1 in the November 7 regular season final at BMO Field. DC is unbeaten in its last nine regular season games (3-0-6) against TFC since August 2017, although Toronto posted a 5-1 extra-time win in post-season 2019.

Toronto will be missing wing-back Jacob Shaffelburg (leg) to an injury for the second week in a row while centre-back Chris Mavinga (lower body) is a doubt. Mexico defender Carlos Salcedo returns from suspension.

The Washington Post reports DC will be without striker Michael Estrada, who has returned to his native Ecuador for family reasons before reporting for national team duty ahead of World Cup qualifiers. Estrada scored twice in the season opener.

Saturday’s forecast calls for a cloudy afternoon and temperatures of 11 degrees Celsius, with a chance of rain after the 3pm kickoff ET at BMO Field.

Napoli forward Lorenzo Insigne, who was due to join Toronto in July, has been called up by Italy for the World Cup qualifying series against North Macedonia.