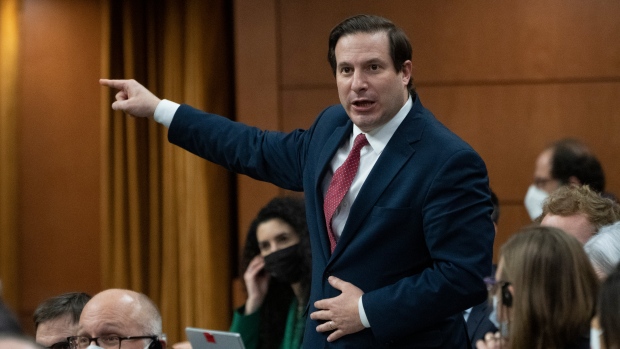 OTTAWA — Establishing a no-go zone in the Canadian capital, ensuring tow trucks are available to remove vehicles from city streets and stopping the flow of money and goods to keep anti-government demonstrators fed and fueled are the obvious means of Emergency Act helping end the Ottawa blockade, Public Security Minister Marco Mendicino said on Sunday ahead of a House of Commons vote on the controversial move.

The Conservatives, however, have been highly critical of the government’s move and some are pushing the Liberals to lift the measure now that the blockade that has effectively closed the city for more than three weeks appears to have ended.

There is one day left of debate about the government’s decision to enact the law.

Lawmakers will vote on the motion Monday at 8 p.m. ET, and are expected to pass with the joint support of the Liberals and the NDP. The Quebec Bloc and the Conservatives opposed it.

If the motion fails, the deed and any extraordinary powers deriving from it will be revoked. If they pass, they will remain in place until mid-March at the latest.

Lawmakers have debated the measure since Thursday morning, although a 15-hour debate planned for Friday was called off due to security concerns as police moved to remove protesters who were still blocking roads outside.

Speaking to The Canadian Press in an interview Mendicino said he had no doubt that the government’s decision to take such action was the right call.

“The Emergency Act has been instrumental in turning the tide against the illegal blockade,” he said.

Police began issuing written warnings to protesters to leave on Thursday, and the following day pushed them out in a show of force that lasted into Saturday.

On Sundays, roads are mostly clean, tow trucks haul the last of the vehicles, and locals are on their neighborhood roads assessing the aftermath and cleaning up the rest of the trash. Only a small group of protesters remained around the city centre, under intense police surveillance. Several convoy leaders were imprisoned, and 206 financial accounts were frozen.

Ottawa’s interim police chief Steve Bell said what some described as rule-breaking by demonstrators “were actually moments of terror for the city.”

He said 191 people were arrested in connection with the protests, with 389 charges set so far including damage, obstructing police, assault and attempting to disarm a police officer.

“The powers given to us through the State of Emergency Act, through provincial emergency measures, through orders, and through other legislative means that we have to put an end to these protests, are very beneficial for us to be able to be where we are today, seeing the way.” -clear roads and have residents who can walk back through their downtown core,” Bell said.

Ontario Conservative MP Michael Barrett said during Saturday’s debate that implementing the Act was simply a “power grab” because the charges brought against those arrested were not new laws.

“The charges filed in Ottawa are for crimes and conspiracy,” he said. “We don’t need an Emergency Act to deal with these things. We have a public order operation going on on the streets of Ottawa. This is not a national emergency.”

Fellow Ontario Conservative lawmaker Marilyn Gladu said on Twitter Sunday that Liberals should rein in the use of the measure again now that the demonstrations appear to be over.

“If it’s just about clearing blockages and not about power grabs and overreaching governments, the Liberals will undo these measures,” he said.

Mendicino said the measure was necessary to prevent the blockade from continuing, for which the risks remained real. Police in British Columbia had to close the border crossing near Surrey, BC again over the weekend because of the protests.

NDP MP Brian Masse, whose trip to Windsor West has been affected both by the previous blockade on the Ambassador’s Bridge and ongoing efforts to prevent it from rebounding, said repeatedly during the debate that the crisis was not over for his constituents.

“Life is not normal,” he said, pointing to the ongoing road closures and police presence in the area.

The Ambassador’s Bridge is the busiest border crossing between Canada and the United States, accounting for about a quarter of the daily commuting back and forth.

Regardless of what happens to the vote, there will be an investigation to review its use. A report must be filed in the House of Commons and Senate by February.

The Senate must also vote on the use of the legislation, but debate has not yet begun in that chamber.

This report by The Canadian Press was first published on February 21, 2022.