Murder in Ukrainian city of Bucha is ‘clearly a war crime,’ says Joly 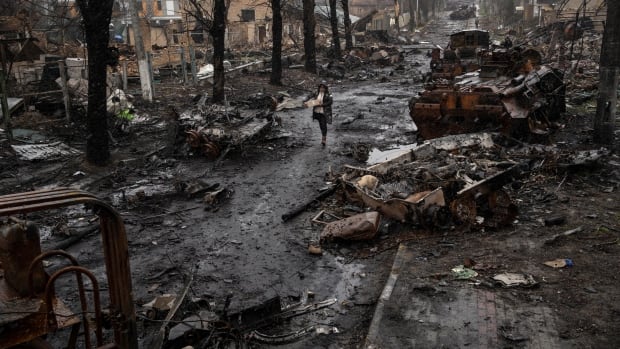 Foreign Minister Mélanie Joly is just the latest western official to condemn Moscow’s actions in Ukraine after Russian troops withdrew from the city on the outskirts of Kyiv, leaving the streets littered with what appeared to be the bodies of civilians.

Some appear to have been deliberately killed at close range. Some bodies were left in the open or in hastily dug graves.

“This weekend, the world witnessed a disgusting and senseless attack on innocent civilians in Bucha. This act of terror will not go unpunished,” Joly said at a press conference with her Finnish counterpart in Helsinki on Monday.

“This is a clear war crime.”

Mayor Bucha feels ‘great anger’ about the killing of civilians

‘If this crime is not brought to justice, it will happen again in a different country,’ Bucha Mayor Anatoly Fedoruk said through an interpreter. 6:00

“We are building a great community, a great place, which was destroyed by the Russian military,” Bucha Mayor Anatoly Fedoruk told CBC News.

“The only one [feeling] is great anger. Great anger not only for the Russian military, but I am very sorry to say it, even to the Russian people.

“If this crime is not brought to justice, it will happen again in a different country.”

On Monday afternoon, the House of Commons passed a motion filed by NDP MP Heather McPherson condemning the scene that came out of Bucha as a war crime.

The motion also asks Parliament to support increased aid to Ukraine, accountability at the International Criminal Court and stronger trade restrictions and economic sanctions against Russia.

‘There should be more sanctions:’ Joly

Joly said Canada would continue to support the International Criminal Court’s investigation into the actions of Russian troops during the war.

“They will be held accountable,” said Joly.

On Monday, the government announced a new round of sanctions against those with ties to the Russian and Belarusian regimes. Canada has nine Russians and nine Belarusians on its list “for facilitating and enabling the violation of Ukraine’s sovereignty, territorial integrity and independence.”

“As for the issue of providing lethal weapons, of course my colleague Defense Minister Anita Anand is working on many scenarios and I will support her while she does her job.”

WARNING: This video contains graphic footage. The devastation of war is no more evident than in Bucha, one of Kyiv’s northern suburbs where the streets are littered with the bodies of civilians and burning fighting vehicles. 5:05

“Dead people have been found in barrels, cellars, strangled, tortured,” he said.

Russian Foreign Minister Sergei Lavrov has dismissed the accusations and described the scene outside Kyiv as a “stage-set anti-Russian provocation.”