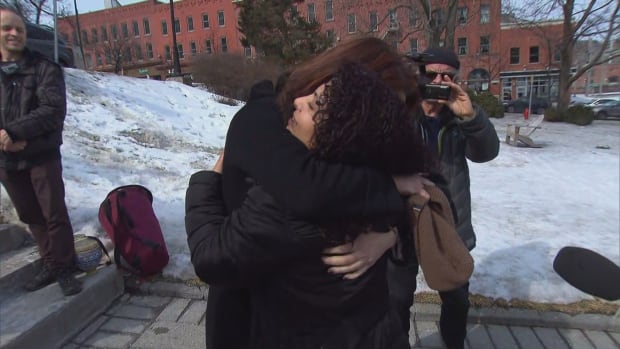 The Quebec family of Saudi blogger Raif Badawi has confirmed he has been released from a Saudi prison, 10 years after he was jailed for criticizing religious figures and promoting liberal views on Islam.

As the news spread, Haidar was greeted on Friday afternoon by cheering supporters holding posters bearing a photo of her husband, and she shared several tearful hugs outside the town hall in Sherbrooke, Que., where she lives with her three children.

“I’m at a loss for words,” said Haidar, in an interview with Radio-Canada. “I want to find the words, but I’m just happy.”

“He, I don’t know how many kilometers he is, but the important thing is that Raif is free,” he said.

VIEW | ‘Mom, is that true?’ Badawi’s sons asked about their father’s release:

‘The important thing is that Raif is free,’ says wife of blogger released from Saudi Arabia’s prison

Ensaf Haidar reacts to news that her husband was released from prison in Saudi Arabia. Raif Badawi spent a decade in prison after promoting liberal views on Islam. 0:49

Haidar has been fighting for her husband’s release for the past decade. He received a call this morning from Badawi, as he was signing his release papers.

“He’s fine. He doesn’t even know what to say,” he said. “It’s still a surprise for us, but a good surprise.”

She said her two children were at home when she received the call.

“[They said] ‘Mom right? Is that true?’ Their response was very touching,” Haidar said.

“We jumped everywhere we ran inside the house,” said the couple’s daughter, Najwa Badawi, 18. “It’s a burden on our shoulders.”

Release conditions are not clear

Badawi’s family had been anticipating his release, as he had served his full 10-year sentence on February 28.

Badawi’s case made international headlines when he was flogged 50 times in public, and another caning sentence was suspended following international outcry.

Haidar admitted that he did not know the conditions for Badawi’s release.

Collette Lelièvre, Amnesty International Canada’s campaigner who has worked on Badawi’s case for most of the past decade, said the organization continues to call for the lifting of the travel ban imposed on Badawi by the Saudi government, so he can join his family. in canada.

The organization has planned a demonstration in Montreal next Tuesday in support of Badawi and calls for more vocal action from the Canadian government.

“Now is the time to push,” he said. “If we work for Raif, we also work for other human rights defenders and other political opponents [in Saudi Arabia].

She commended Haidar for her hard work to secure her husband’s freedom.

“He has done a lot! Speaking at conferences, demos, traveling the world to get to this point,” said Lelièvre

On Friday evening, Prime Minister Justin Trudeau said in a tweet that he was “relieved that Raif Badawi has finally been released.”

“My thoughts are with his family and friends who have tirelessly advocated for him for nearly a decade,” Trudeau said.

“Our officials are now working to seek clarity on the conditions of his release.”

After 10 years my father is free! pic.twitter.com/ZF2GePvHGu

“Finally! I can’t stop thinking about his children who will finally see their father again,” Quebec Prime Minister François Legault wrote on Twitter.

Alexis Brunelle-Duceppe, Québécois Bloc’s human rights and immigration critic, said Haidar’s persistence was a lesson to the world to “never give up,” adding that she called him this morning with “amazing news.”

“Today will be remembered as the day Raif Badawi was free,” he said.

Brunelle-Duceppe introduced a motion in the House of Commons in January 2021 in favor of granting Badawi Canadian citizenship. The motion was adopted unanimously by the Senate last June.

Brunelle-Duceppe said the Blok would continue to support Badawi’s family through the next step by bringing him to Canada.

“It’s an incredible day. It’s a fantastic day. It’s a unique day in their history – in our history, I think,” he said.

Although Canadian consular services are not normally offered to non-Canadians, NDP MP Alexandre Boulerice urged the government to make an exception in this case, so officials can help return Badawi to his family.

“When human rights are under attack around the world, it is even more important that Canada stands up for the protection of human rights against threats from authoritarian states,” Chong said.