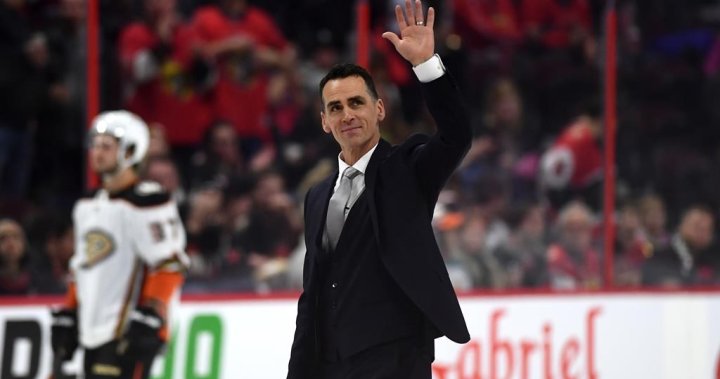 OTTAWA — Wade Redden was a mainstay on the Ottawa Senators blue line for 11 years and for his efforts, the fan favorite was the first player to be inducted into the team’s Ring of Honor.

Redden first arrived in Ottawa as a 19 year old looking to fulfill his childhood dream of playing in the NHL and leave a legacy both on and off the ice. Fans welcomed Redden home to a standing ovation in Monday’s pre-game ceremony.

“Really, a very special feeling to be acknowledged,” said Redden. “I look back on my days in Ottawa and it was the best of my career and a pretty special part of my life.

“Those were special years because of the team we had, the team-mates I had and the memories we made.”

Redden was drafted second overall by the New York Islanders, but was traded to the Senators when Bryan Berard, selected first overall, refused to enter Ottawa.

Coincidentally, the Senators’ current coach DJ Smith had also been drafted by the Islanders in 1995 and the two attended boot camp together and would cross paths over the years.

“He was a great player here for a long time,” said Smith. “The stability, you saw it today, everyone is looking for a defender who can give you those minutes, get it right, play anyone, good stick, everything.

“I think, obviously, he gave that to the Ottawa Senator for a long time.”

The smooth defense credits Lance Pitlick, his first D partner, for supporting him during his rookie season in which he played all 82 games. He also acknowledged fellow defenseman Jason York and veterans Randy Cunneyworth and Curtis Lescyshyn. Redden added that the list would be too long to name everyone who impacted his career.

The Lloydminster, Sask., native played 838 games for the Senators, who rank fourth among the Senators all-time, behind Chris Phillips (1179), Daniel Alfredsson (1178) and Chris Neil (1026), all present to celebrate their former teammates .

The friendships forged with Alfredsson, Phillips and Neil run much deeper than just being teammates over a number of years. The group has celebrated countless births and deaths, successes and disappointments and memories which caused lots of laughter when they reunited.

“They’re like brothers,” Redden said. “I mean the people you keep in touch with when you see them again, it’s like you picked up where you left off… you just got such a close bond.

“I think that’s what helped us to be successful on the ice.”

Redden is remembered for his incredible two-way skills and solid presence as part of D-core Ottawa, but he did the same.

In 1997, Redden launched “Wade’s World”, which included purchasing a suite for use by children undergoing treatment at Eastern Ontario Children’s Hospital to enjoy the Senator’s games and concerts. He also loves his visits to CHEO where he gets to spend time with the kids and their families and he is an active supporter of the Ottawa Senators 65 Roses Sports Club.

“I love the idea of ​​doing something for kids,” says Redden. “I met a lot of great kids and a lot of great people and when I look back on it now, with my own family with young kids, it’s really special to know that it’s continuing and a lot of kids are able to do it. benefit from it.

“I think I have as much fun as the kids because I can see the joy they get from coming to games and being able to give them time to remember that is very special to me.”

Redden joined the Senators when they were still fighting for honors, but thanks to him and players like Alfredsson, Leschyshyn, Phillips, Marian Hossa and many others, the team became perennial playoff contenders.

Despite 11 consecutive playoff appearances, which coincided with Redden’s tenure in Ottawa, the Senators have never won the Stanley Cup, reaching the final only once in 2007 and losing to Anaheim in five games.

“Playoff games at home, big wins, and the energy from the fans in the building were great things to remember,” recalls Redden. “We had some really good games, especially on home ice, and that’s nice to remember.”

Joining Redden for the celebration were his wife Danica, whom he met in Ottawa, his three daughters, Leni, 12, Harper, 10, and Ryann, 6, his father, Gord, brother, Bart, and many friends and teammates. .

Redden admits that he still feels the absence of his mother, Pat Redden. He died in 2006 of cancer during the Senators’ first-round series against Tampa Bay. Redden missed Game 2 of the series to fly home to be by his mother’s side, but returned to Game 3 and was the best player on the ice, scoring one goal and two assists in an 8-4 win.

“I can’t help but be a little emotional about not being here,” Redden said. “There are so many memories coming back and so many people who helped us as he went through it all.”

Redden recently joined the Senators in a player development role and said it felt natural to return. Redden joins the late Bryan Murray, former GM Senator and head coach, in Ring of Honor.

This report by The Canadian Press was first published on December 12, 2022