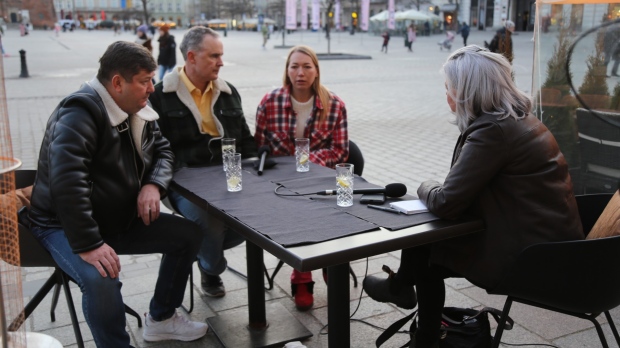 More than half a million people have fled west of Ukraine, their lives turned upside down in an instant when Russia launched its invasion of the country.

American Jeff Vinall and his Ukrainian wife, Anna, began preparing for the worst when Russian President Vladimir Putin gave a rambling and deceitful speech about Ukraine on February 21, just days before the attacks began.

“We watched his speech on Russian television live and he said Ukrainians have no right to exist,” Jeff Vinall told LaFlamme. “He said their culture, their language and their identity were fiction – and I turned to Anna and I said, ‘Ukrainians to Putin are like Jews to Hitler. We have to get ready to get out of here.’”

“My father said, ‘No, that’s impossible, Belarus will not support us,’” added Anna Vinall. “And today they came to kill them all.”

Anna’s parents, grandmother, and sister’s family remained in the country. He says its hard to get news from them.

“They can achieve [us] just two seconds just to say they are alive,” he said. “I just told my mom I love her.”

Alongside the couple, another expat has recently fled with his wife, mother, and their two teenage sons. Originally from Scotland, Stuart McKenzie has lived in Ukraine for 20 years.

Jeff Vinall wants the world to stop buying Russian gas and financially isolate the country “until Vladimir Putin leaves office and is tried for war crimes.”

“My city, my family and all my loved ones are facing destruction from the Russian war machine,” he said. “I was sad yesterday, I am angry today.”