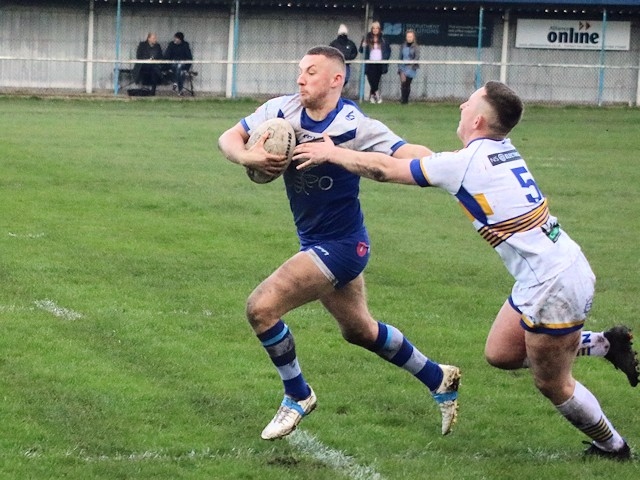 Lewis Butterworth on his way to scoring for Mayfield

What a game to start the season! The match at Mayfield on Saturday 5 March was a cracker although Mayfield started the game putting themselves under immense pressure, allowing York’s side to repeat five sets in their twenty in the first eight minutes. Mayfield’s defense was superb, refusing to let the York attackers cross their line.

Cole Connolly set his stall early by destroying everything in his path. His example was followed by strikers Darcy Maroske, Shaun Hurley and Travis Holden who worked late in this department. Dec Sheridan and Connolly were starting to master the game and once Mayfield had it they never let go. In the ninth minute, Kyle Marvin of Canada showed he would fit in well at Mayfield when he broke his wing and put James McDade through space for the first score, converted by Zac Hartley, 6 – 0.

The forwards continued their attack on York’s attack and the team played some excellent rugby. Lewis Butterworth was sent off for ten minutes by the referee for a foul and York might have thought they could take advantage but Mayfield and especially Nick Hargreaves had other ideas as time and time again he rocked the attack back.

Coach Sam Butterworth introduced new signing Jarred Dash into the fray and Dash, who had only landed in Manchester three hours earlier, started a run with some great defense and an equally impressive attack and when a raging Hargreaves broke the line and made it 40m, Connolly looked to use the ball at York twenty, appeared Dash to crash under the stick, Hartley converted to double the lead, 12 – 0.

York showed their class, refusing to give up and after a fine spell and well-crafted corner saw their winger pick up the ball to cut the deficit in the corner, 12 – 4.

Now it’s a classic game of rugby league played by two good teams and the crowd loves it. Mayfield’s part liked it even more when Marvin again showed his class, this time crossing his own line, 16 – 2 at half-time.

The second half saw Mayfield increase pressure and skill level at the same time. The two youngsters on the side of Ben Needham and Matty Brown were really impressed with their near-perfect contribution. Brown was impressive, breaking his first tackle almost every time he picked up the ball. Strong performances from forwards always lift the team and give confidence to defenders to play an open game and this is one of those opportunities. The forwards are huge and the defenders move the ball brilliantly. Lewis was the beneficiary of this as he found himself late in one of these moves and wedged into a corner, Hartley brilliantly converted from the touchline, 22 – 4.

Mayfield had been on fire for a while now and York was showing their pedigree again as they responded with a converted score, 22 – 10. Sheridan continued his fine form with a superb strike which Zac Hartley managed, again converted by Hartley 28 – 10. Connolly then added a penalty for 30 – 10.

Matty Brown then got the position from where Travis Holden grabbed a well-received try which was converted by Hartley to round out the score, 36 – 10.

It was a resounding victory for Mayfield and a marker for the campaign to come. Coaches Sam Butterworth and Steve Wood are pleased with the team’s performance and believe there is better to come once the new signings have settled. It was an all-around team performance, Ieun Higgs and Lewis Butterworth showing their class throughout as Connolly and Hargreaves did but the decision to split sponsorship for IBU fell to Reece Hamlett, who was harshly dismissed towards the end for a harmless push, and Kyle’ The Canadian. ‘ Marvin.