Russia Is Bombarded With Economic Sanctions, Here’s The List 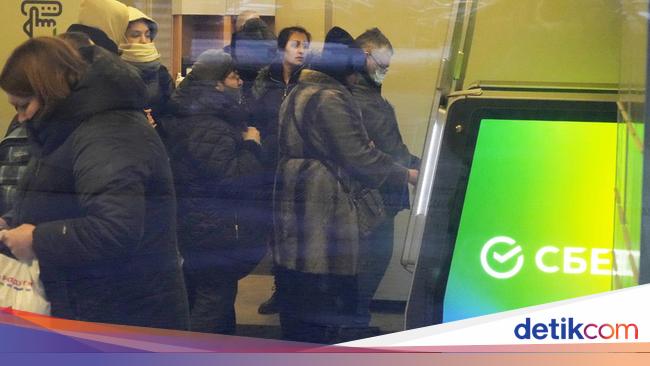 Many countries have imposed sanctions on Russia, as a result of Russia’s invasion of Ukraine since February 24, 2022.

The sanctions are aimed at crippling Russia’s economy in order to stop its attacks on Ukrainian territory. The United States (US), European Union (EU), Canada, Japan and Taiwan have each launched sanctions against Russia. The series of Russian sanctions will target banks, oil refineries and military exports.

Quoted from the Al Jazeera page (7/3/2022), here is a complete list of Russian sanctions from a number of countries:

US President Joe Biden has imposed sanctions on Russia more broadly in a bid to cut Russia off from the global economy. The US sanctioned Russia by targeting special action against tycoons by hunting down luxury assets such as cruise ships, commercial banks and Russian state-owned banks, and targeting sanctions on close relatives of Russian President Vladimir Putin.

A new round of US sanctions has banned exports of refining technology which has made it difficult for Russia to modernize its refineries. Last week, the US and its allies also banned several Russian banks from the SWIFT international payment system. Biden also said the US was ready to add sanctions if Russia went any further.

AE’s package of sanctions on Russia aims to inflict “severe damage” on Putin’s country’s economy. The Bank of Russia is the target of EU sanctions. In addition, the EU will target Russian parliamentarians, who support the recognition of the breakaway territory from Ukraine. The targeted sanctions include asset freezes and visa bans.

British Foreign Secretary Liz Truss said Britain would be prepared to impose tougher sanctions if Russia did not back down. The sanctions include banning various high-tech export activities, extractive industries, and barring Russia’s main airline Aeroflot from landing in the UK.

Justin also emphasized that Canada will prioritize immigration applications for Ukrainian citizens, who wish to come to Canada.

Switzerland will adopt all EU sanctions on Russian individuals and companies by freezing their assets.

The Czech Republic’s witness to Russia is banning Russian airlines from flying to central European countries. Prime Minister Petr Fiala will also expedite the exit of two international banks set up in Russia.

Meanwhile, the Ministry of Finance will analyze the access of Russian-owned companies. The history of the 1968 Soviet-led invasion of Czechoslovakia, makes the Czech Republic’s stance tougher than some of its other Western European partners.

Germany’s sanctions against Russia are to stop the process of certifying Nord Stream 2 gas from Russia, as announced by German Chancellor Olaf Scholz.

The termination of the process for certifying the Nord Stream 2 gas pipeline from Russia is a lucrative deal that has long been sought by Russia, but has been criticized by the US for increasing Europe’s dependence on Russian energy. The $11.6 billion project is known to be owned by Russian state-owned gas giant Gazprom.

Taiwan sanctioned Russia by imposing economic sanctions on Russia for its invasion of Ukraine.

Asked about the sanctions, Taiwan Semiconductor Manufacturing (TSMC), Asia’s most valuable listed company, said it had a strong export control system and would follow the rules.

New Zealand sanctioned Russia by banning targeted travel to Russia, and barring trade to its military.

Prime Minister Jacinda Ardern stressed that Russia’s attack on Ukraine was inhumane, and said that an unimaginable number of innocent lives could be lost because of Russia’s decision to attack Ukraine.

Ukraine also sanctioned Russia by limiting almost all activities, such as a ban on entry to Ukraine, prohibiting access to assets, capital, property, business licenses.

Ukraine’s sanctions against Russia have also been approved by the Russian Parliament, against 351 Russians, including lawmakers who support recognizing the independence of the separatist-controlled region and sending Russian troops into eastern Ukraine.

That was a list of Russian sanctions launched by a number of countries for Russia’s invasion of Ukraine.