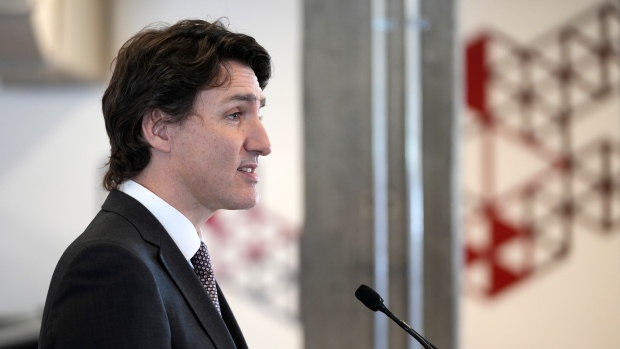 Prime Minister Justin Trudeau will travel to Europe next week for a series of meetings with other world leaders as Russia’s offensive in Ukraine continues.

Trudeau will stop in Britain, Latvia, Germany and Poland, he announced on Friday, to meet with partners and allies.

“We will discuss how to continue to support Ukraine, how to strengthen democratic values ​​around the world, and how to better defend democracy and fight Russian aggression,” Trudeau said.

The prime minister said that in recent days there had been a “strong, seamless, coordinated response” from allied nations, and he was looking forward to sitting down in person to plan what’s next and how to jointly fight disinformation. elements of this war.

Later in the week Polish President Andrzej Duda said he and the prime minister would meet in the country, which was expected to happen in Warsaw.

Latvia is where the Canadian Armed Forces have members taking part in the NATO Reassurance operation, which focuses on training and prevention efforts.

Trudeau said the West was inspired by Ukraine’s strength in defending its country, and allies were “united” in ensuring Russian President Vladmir Putin’s “terrible mistake” by invading a sovereign nation would be “very costly.”

Asked whether Canada’s position in the no-fly zone had changed since the power plant was reportedly seized, Trudeau said putting NATO in direct conflict with the Russian army would be an “unfortunate” escalation and something that needed to be avoided.