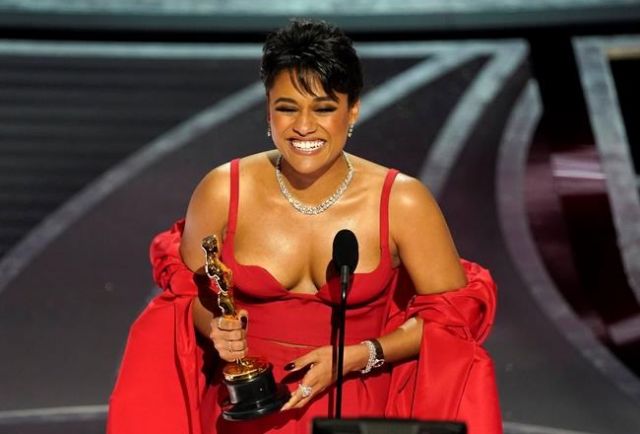 Ariana DeBose accepts the award for best performance by an actress in a supporting role for “West Side Story” at the Oscars on Sunday, March 27, 2022, at the Dolby Theater in Los Angeles. (AP Photo/Chris Pizzello)

Will Smith’s hard smack of Chris Rock at the Academy Awards appeared to have had a negligible impact on the show’s television audience. But the world of social media is a much different story.

The ABC said there were about 22.7 million social media interactions during Sunday’s ceremony – the most for the Oscars broadcast and more than double the 9.5 million recorded from last year’s show.

What do you think everyone is tweeting or posting?

The network said the Oscar video reached 16 million views on Facebook, Twitter or YouTube, also a record for the show. The ABC had no details on what video clips were the most popular, a spokeswoman said on Tuesday.

The broadcast as a whole drew 16.6 million viewers, up 58 percent from the 2021 show that was dramatically reduced due to the pandemic, the company Nielsen said. But this year’s show is down 30% from the more typical 2020 broadcast, which is the second-smallest audience.

Then viewership dropped to 16.8 million before rising to 17.4 million during the period in which Smith won his best actor award, Nielsen said.

Led by coverage of the NCAA men’s basketball tournament, CBS won this week by an average of 6.2 million in prime time. Despite boasting an Oscar, ABC came in second with 5 million. NBC has 2.28 million, Fox has 2.27 million, Univision has 1.5 million, Ion Television has 1.1 million and Telemundo has 960,000.

For the week of March 21-27, the 20 most-watched programs in prime time, their networks and broadcasts: