Student exchange in Canada holds videoconference with diplomats in Brazil 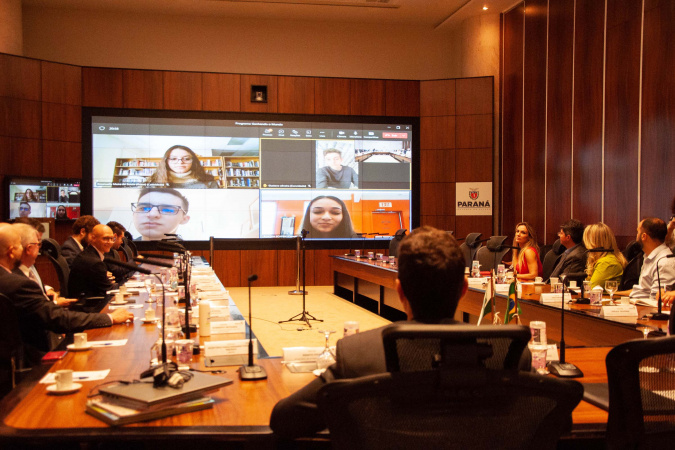 Students from a network of countries participating in the Gaining the World exchange program spoke this Wednesday (30) with Canada’s ambassador to Brazil, Jennifer May, and with Canada’s consul general in São Paulo, Heather Cameron. The students participated via video call, while the delegates from the Indonesian Embassy and Consulate were in Palácio Iguaçu, Curitiba, with the Deputy Governor Darci Piana, and the Minister of Education, Renato Feder.

During the meeting, four out of 100 exchange students shared their experiences in Canada. They answered questions posed by May and shared how they adapted, what was their perception of Canadian education and how they believed that the exchange of learning could benefit them, in the future, on their personal and professional paths.

Student Gabriel Fogaça dos Santos says that one of the main differences between his schools in Canada and Brazil is the schedule. He logs in every day at 8:30am and leaves at 3:45pm. In addition, students at Glenlawn Collegiate, in the province of Manitoba, typically use notebooks at all times, leaving pencil and paper behind to solve equations.

The student was excited to share these and other experiences when he returned to Professor Júlio César’s Colégio Estadual, in the municipality of Rebouças, in South-Central. “I am very happy to think that everything I have experienced is the result of my studies, my dedication. That’s the best part,” Gabriel said.

Apart from listening to student reports, the meeting participants also discussed other possibilities of cooperation between the State of Paraná and Canada. “This is the first movement, but we want to send thousands of students not only to Canada, but to the rest of the world”, said secretary Renato Feder referring to the Gaining the World program.

WIN THE WORLD – Gaining the World, created by the Secretary of State for Education and Sport, offers training of secondary school students in foreign educational institutions that have courses equivalent to secondary schools in Brazil. Young people are selected based on a ranking of the best grades among public schools and leave for Canada in February this year.