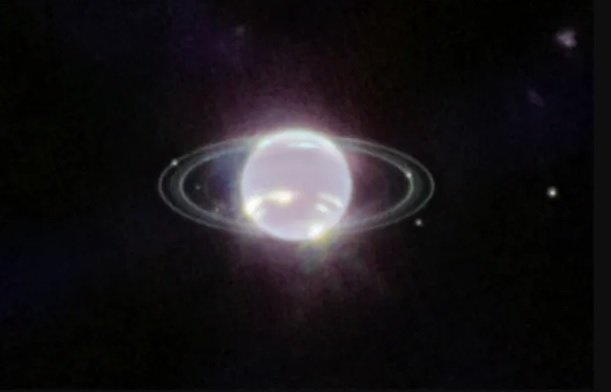 The James Webb International Space Telescope has captured its first records of Neptune, an ice giant and the eighth-farthest planet in our solar system. The images were released by NASA, the US space agency, and ESA, the European space agency, on Wednesday morning (21).

According to NASA, this unprecedented recording not only reveals the sharpest view in 30 years of the rings of this distant planet, but also its key features from an entirely new perspective.

In the new images, it’s possible to see its rings (Neptune has at least five main rings made up of billions of rock, ice and dust particles) and some fainter dust lanes from the only planet in our solar system that is not visible to the naked eye. .

The new photos surprised scientists: “It’s been three decades since we’ve seen these faint, dusty rings, and this is the first time we’ve seen them in the infrared,” said Heidi Hammel, a scientist from the James Webb interdisciplinary team. telescope.

The recordings were produced using the observatory’s near-infrared camera (NIRCam), which has three infrared filters that show detail from the planet, which is more than 30 times farther from the Sun than Earth.

With the equipment, Webb was also able to capture seven of Neptune’s 14 known moons. In the photo, a very bright point of light stands out next to Neptune, the moon of the planet, called Triton.

The James Webb Space Telescope started operating a few months ago, always giving us new details about distant galaxies and astrological phenomena thanks to its powerful lens. But its lenses are not only used to observe what is far from us, but can be directed to stars closer to us, such as Mars.

And that’s what James Webb did on September 5, with the images made public for the first time this Monday (19) via the Twitter of the European Space Agency (ESA), one of those that operate the telescope International Space Agency, as well as NASA and the Canadian Space Agency (CSA).