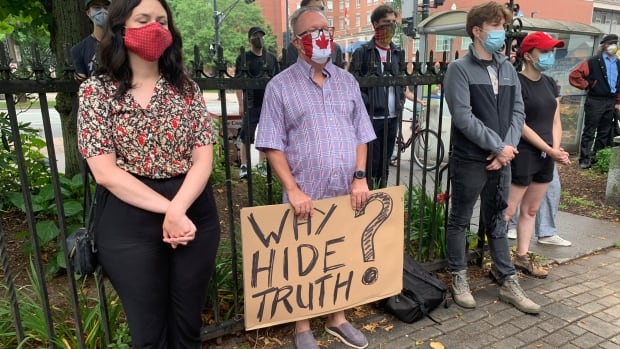 An independent legal expert and attorney for the families of victims of Portapique said it was imperative that RCMP officers testify in person to be transparent and maintain public confidence in the ongoing investigation in Nova Scotia.

The Mass Victims Commission heard arguments Thursday from lawyers on both sides of the issue of the RCMP’s live testimony as part of its work to investigate what happened during the April 2020 massacre.

The National Police Federation, which represents regular and reservist RCMP members under the rank of inspector, argued the 18 officers asked to testify by lawyers for victims’ families could be re-traumatized by doing so.

But the family’s attorney said there were many gaps in evidence for what happened on April 18-19, 2020, that had to be filled, and testifying about violent crimes was part of the officer’s job.

“We are extremely frustrated at the prospect of having to justify fact-finding in the fact-finding process,” said Michael Scott of Patterson Law, whose firm represents more than a dozen families.

He said lawyers had spoken to their own clients about the testimony and nearly every one of them was willing to appear before the commission.

“We don’t want to attack the officers or traumatize them further – we want to carry out an investigation.”

Commission documents presented this week summarizes what is believed to have happened in Portapique. They claim Gabriel Wortman attacked his old partner and went on to kill 13 neighbors after he fled and hid in the woods.

The gunman killed nine more people while posing as Mountie the next morning and drove nearly 200 kilometers through the Nova Scotia countryside, mostly in a decommissioned police car he adapted to look like the real thing.

Scott said it was important to hear from the initial team of three officers, led by Const. Stuart Beselt, who walked into Portapique after meeting a man who had been shot by gunmen in his mock police car.

For example, Scott said he wanted to know more about why Beselt didn’t head straight to the Blair family home, where the original 911 call had come from and two people had been shot.

The investigation heard that these frontline officers could be called upon to participate in witness circles later in the process to share what they were going through, but some family lawyers said that was not enough.

On its website, the commission describes the witness circle as a “discussion-based format used not to establish facts, but to provide important context for understanding what happened.” The facilitator does not ask direct questions and the circle of witnesses is not an opportunity to examine evidence.

Joshua Bryson, adviser to the families of victims Joy and Peter Bond, said such an exercise would not be the “best use of commission time.”

Tara Miller, attorney for relatives Kristen Beaton and Aaron Tuck, said the investigation could be creative in favor of RCMP officers because they testified in a traumatic manner, but still allowed direct testimony under oath.

“How does one have an investigation with a mandate to investigate what happened and make factual findings about the responses of RCMP officers without hearing a single officer under oath about what happened?” Miller said.

Other lawyers indicated that they wanted to know why the Cobequid Court in the southern region of Portapique, where the other victims are located, was never examined by the RCMP until more than 12 hours later.

Nasha Nijhawan, a police union lawyer, said Thursday there were only a few special circumstances under which investigators could summon officers to testify. That includes gaps or conflicts in the evidence, or areas where the necessary context does not exist.

He said loopholes identified by the family’s lawyers on Thursday were already in evidence from 911 calls, radio logs, and interviews with police and commission investigators.

But Ed Ratushny, professor emeritus in the law school at the University of Ottawa, said the direct testimony segment of the public investigation was critical to the process. However, he says they can sometimes be overlooked by “people who are trying to do the right thing.”

While Ratushny says he sympathizes with officers responding to events in Portapique, police often have to investigate traumatic incidents such as sexual assault and murder of children, and then testify before a jury.

“In this particular situation, I believe it is equally important that they do the same – not to the jury in criminal cases, but to the public in the horrific and horrific thing that has happened in this part of our country,” said Ratushny, who has also worked with investigation as legal advisor and writer Public Investigative Behavior: Law, Policy and Practice.

“It’s all about what the police officers did that night; it’s a very important aspect of this. And I believe the public should see and hear them.”

Governments and police organizations like the RCMP prefer to keep their business secret, Ratushny said, which is often necessary. However, he said the point of a public inquiry was to restore confidence in an institution that had failed in some ways.

Nijhawan has also proposed including expert reports from psychologists on what it means to require direct testimony for RCMP officers.

However, commissioner Michael MacDonald said Thursday that the report was not necessary for their decision.

The investigation didn’t sit down on Friday. The commission will reconvene Monday when lawyers will continue arguments about why certain RCMP officers should be allowed to testify.