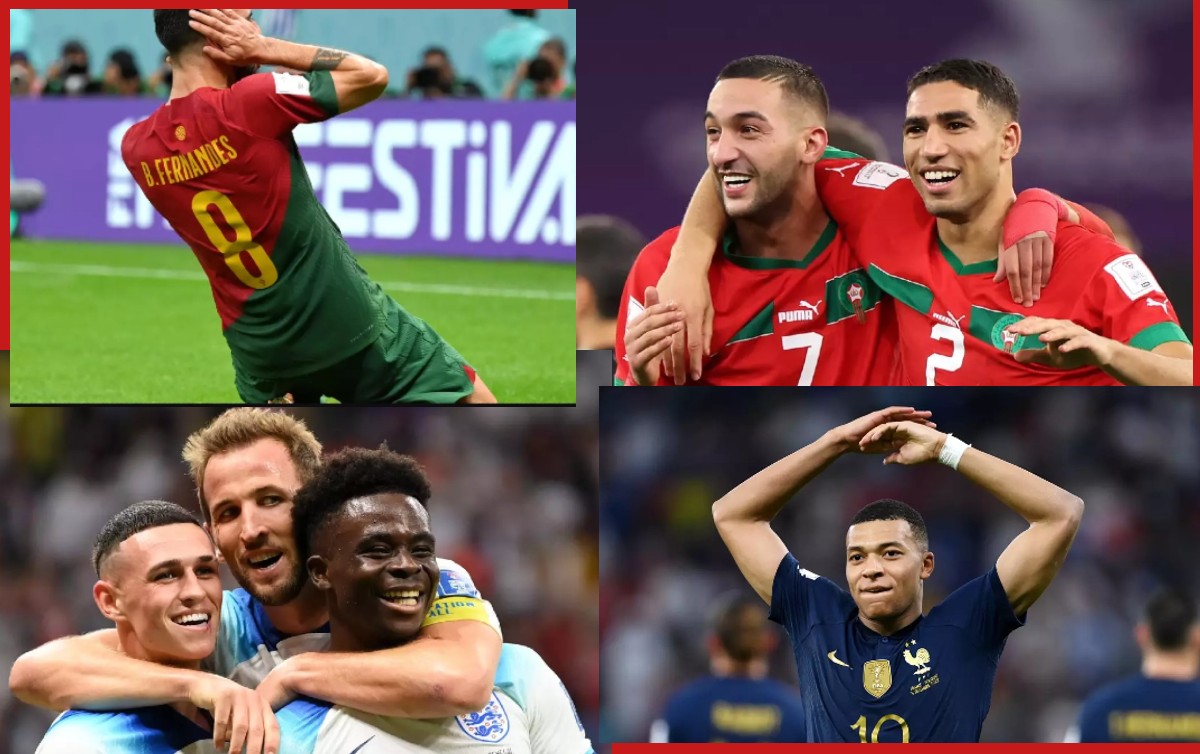 São Paulo – The last two qualified for the semi-finals of the World Cup in Qatar will be defined this Saturday (10), in clashes that promise balance and emotion. Portugal take on surprising Morocco from 12:00 at Al Thumama Stadium and England face France at 16:00 at Al Bayt Stadium, both games on Brasilia time. The winners will face each other on Wednesday (2 p.m.), at 4 p.m. to decide who will go to the final.

Brazil hesitate in extra time, lose Croatia on penalties and are excluded from the Qatar Cup

The biggest star of Portuguese football and his last World Cup, Cristiano Ronaldo, is not living his best moment. He was a reserve in the match against Switzerland, where he saw his substitute, Gonçalo Ramos, register three goals. Coach Fernando Santos must maintain the strategy, and guarantees that the group is united: “Cristiano, naturally, was not very satisfied. Otherwise it would be difficult. It was a calm conversation, where I explained my points of view”.

Solidity and the Cup’s biggest fans

On the other side of the field will be the surprising Moroccan team, which remains undefeated in the Cup with two wins and two draws. In the group stage, the African team drew 0-0 with Croatia in the first round. Then they beat Belgium 2-0 and Canada 2-1. In the round of 16, they made history by eliminating favorites Spain on penalties.

The Moroccans have conceded only one goal since coach Walid Regragui took charge on August 31 this year. It was during the victory against Canada, during the first phase of the Qatar Cup. Besides a solid defense, formed by Saïss and Aguerd, right-back Hakimi is currently one of the best in the world in this position. He is a Paris Saint-Germain player and leads the national team world in tackles. The Moroccans also have goalkeeper Bono, Canadian-born and Sevilla player, who saved two penalties against the Spaniards, in addition to some superb saves in regular game time.

In addition to the defense, the midfield has Sofyan Amrabat and Ounahi, and Boufal in attack. The trio are already attracting interest from Europe’s biggest clubs for next season. Finally, the team has two talented wingers, Ziyech and Boufal.

The Moroccan public should be in the majority in the stadium, because the team has succeeded in uniting the entire African continent and all the Arab countries around its objective: to be the first African team to reach the semi-finals of a World Cup. In 2010, in South Africa, Ghana played and lost the quarter-finals against Uruguay.

At the last World Cup (2018, in Russia), Portugal and Morocco faced each other in the group stage. Portuguese victory by 1 to 0, with a goal from Cristiano Ronaldo.

The most anticipated duel

England and France face a clash that can be considered a first World Cup final. The English side are undefeated so far, with three wins and one draw. In the group stage, they beat Iran in their debut by 6-2. Then they were 0-0 with the United States and beat Wales by 3-0. And, by the same scoreline, they defeated Senegal in the round of 16.

In turn, the current world champion arrives at top speed after beating Poland with extreme ease in the round of 16 with a score of 3 to 1. In the group stage, the Blues start with a defeat 4 to 1 against Australia, beating Denmark 2-1 and ended their Group D appearance with a surprising loss to Tunisia, despite playing with an alternative formation.

France has one of the highlights of the tournament, Kilyan Mpappé. The young striker (23) lifted his first national team championship trophy in Russia and has already overtaken Pelé and Eusébio, scoring eight cup goals before the age of 24. After qualifying for the quarter-finals with a victory over Poland, the Paris Saint-Germain athlete was spared training, nursing a minor injury to his left ankle. But it’s confirmed for today’s match.

“Like the other rivals, England will do everything possible to cancel Kylian (Mbappé). But he has the quality to make a difference. Even in the last match, when he was worse than in the first two matches of the group stage, he was always dangerous for the opponent,” said Didier Deschamps, coach of the France team, at a press conference yesterday.

If the English do not have a big star like France, the highlight is the hierarchical distribution within the cast. For example, striker Harry Kane stood out with his assists, while young defensive midfielder Jude Bellingham (19) helped build most of the team’s goals. English team🇧🇷 The only player who plays outside England (he is from German Borussia Dortmund) contributes with assists, tables and triangulations, in addition to being responsible for his defensive responsibilities.

Coach Gareth Southgate should mount the experienced Kyle Walker on the right flank, where the fast Mbappé should act. But guarantees that there will be no special appointment for the French striker. “The marking will be the same as for any other opposing player. The work to stop Mbappé is collective. We have to protect the spaces on the pitch and make sure there is always support and cover for the players,” he said yesterday as well.

France and England have faced each other 31 times in history, with a positive record English team: 17 victories against only nine for France. In World Cups, the advantage of the English remains: two victories in two games, in the group stages of the 1966 World Cups (won by England) and 1982.

Brazil on the pitch

The duel between England and France for the semi-finals of the Qatar Cup will be refereed by Brazil. Wilton Pereira Sampaio commands the whistle in the match and will be assisted by Bruno Boschilia and Bruno Pires. Neuza Inês Bach has been selected by FIFA to be one of the VAR assistants. This will be the Brazilian’s fourth refereeing in the tournament. Although pundits see little chance, he is among those tipped to referee the December 18 final after Brazil were disqualified yesterday by Croatia.