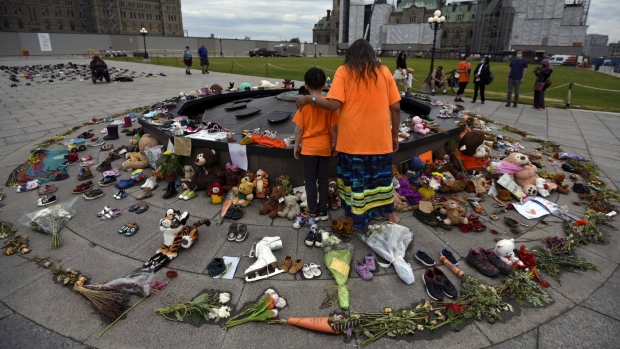 OTTAWA — The federal government initially hoped to remove the Parliament Hill monument dedicated to Indigenous children who died and went missing from residential schools months earlier than it actually did last year, according to newly released documents.

Hundreds of tiny shoes, stuffed animals and flowers began appearing around the Centennial Flame in front of the Parliamentary Central Block last spring, after Tk’emlúps te Secwépemc Nation announced ground-penetrating radar had found the possible remains of about 200 children at the site of a former residential school. near Kamloops, BC

The Parliament Hill Monument is one of many that have emerged across the country as Canadians are confronted with the horrors that Indigenous children face when they are removed from their families and forced to attend these institutions for more than a century.

It became a place where traditional elders and tourists would stand in silence.

According to the document, Crown-Indigenous Relations and Northern Affairs officials originally wanted to hold a ceremony to remove the displays last summer before the widely anticipated election campaign.

They also recommended the department create a plan to deal with similar warnings in the future.

“Removal is being recommended, first and foremost, to ensure the preservation of these items,” reads a memorandum prepared for the department’s deputy minister and released to The Canadian Press through the federal Access-to-Information Act.

“In addition, a memorial cannot remain in its current location given the need for regular maintenance of the Centennial Flame for health and safety concerns.”

The document outlines officials are consulting with the Algonquin Anishinabeg Nation, whose territory traditionally includes Ottawa, and national Indigenous organizations on how to proceed. All agreed that the memorial should be removed with respect.

The preferred option among the three presented is to hold the ceremony a week before August 15. As officials expected, it ended on the day Prime Minister Justin Trudeau asked the Governor-General to dissolve Parliament, triggering elections held in September. 21.

Officials said they envision Algonquin Anishinabeg State presiding over the ceremony “in collaboration with the Government of Canada,” and that consultations will be needed to determine what role departmental leaders can play.

“While it is possible to proceed with the removal given that it is in the best interest of Canadians and arguably understandable as a matter of ordinary government, it will also be necessary to secure any decisions ministers may make prior to the election writing period.”

In the end, the memorial remained in place for another two months until the end of October, when, under the direction of the Algonquin elders, it was secretly lowered by about 20 people, including department officials, without official notification.

The acting head of the First Nation tribal council told The Canadian Press at the time that the items were blessed before they were moved and many of them had been soaked by the rain. The plan, items that are considered sacred will be burned in a ceremonial fire.

In a memorandum prepared to the deputy minister for Indigenous Peoples Relations and Northern Affairs following the relocation, officials said “many of the items are in a state of advanced degradation.”

“Finally, procedures for when future commemorative items are left by the public on Parliament Hill need to be established.”

A spokesman for Crown-Indigenous Relations and Northern Affairs Canada said items from the memorial remained.

“Sacred items are moved and carefully stored at 115 Sparks where (Public Service and Procurement Canada) have been monitoring air quality and humidity levels to ensure proper conservation until they can be shipped to First State Algonquin Anishinabeg.”