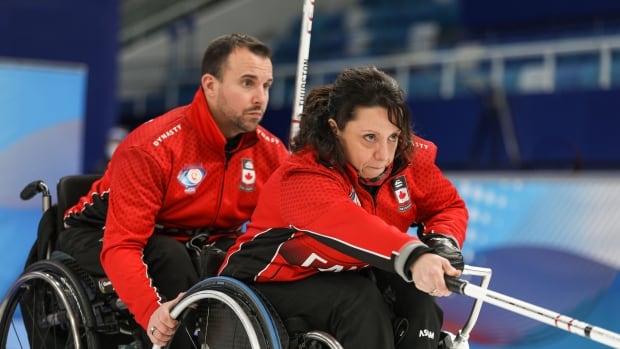 When Collinda Joseph launched her first rock under the ice at the Beijing Paralympics, she was so nervous that she trembled.

“You think, ‘Oh, this is great, I see, I’ll do it.’ And then when you’re really out there… reality hits you!” said the Ottawa curler.

While Joseph’s nerves may have initially gotten the better of him, he and the rest of the Canadian squad beat them – and eventually came home from Beijing with a bronze medal.

In fact, Canada’s wheelchair curling team has not missed a podium at the Paralympic Games since the sport was added to the program in 2006.

‘We support each other’

In wheelchair curling, players deliver rocks with sticks rather than sliding along ice. A teammate may sit behind the shooter to hold up their seat.

There is no sweeper, so having the right touch is essential.

The Paralympics were a bit of a rollercoaster for Canada: they started on a four-game winning streak, lost three in a row, and then won their last three games for a place in the playoffs.

While they lost to China in the semifinals, they bounced back with an 8-3 win over Slovakia to take bronze.

As a substitute, Joseph only played in one game.

But as he told CBC Radio All in a Dayhe contributes in other ways, from providing feedback on how rocks behave on the ice to boosting the morale of his teammates when things don’t go according to plan.

All in a Day7:47Canadian wheelchair curler makes podium at the Paralympics in Beijing

“When we’re together, we support each other. And I think, alternatively, it’s also really important that I do what I can to support them … and just be the cheerleader they need to be,” said Joseph.

“I took the role quite seriously. And I’m glad it turned out so well for us.”