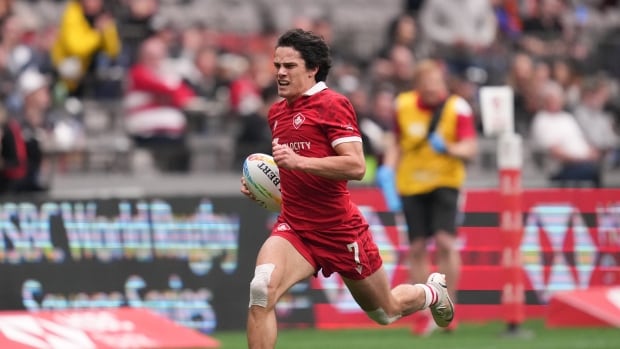 A 17-7 loss to Ireland on Sunday was a frustrating ending for Canada in the HSBC Canada Sevens tournament but the team who have struggled recently are finding confidence and also working their way up to the overall rankings of the series.

“This is a stepping stone.”

The guys won two of the three games they played Sunday and three overall tally up Saturday’s win over Spain. Canada come to Vancouver with just one win in 11 games in the last two tournaments they have played.

The seven points that Canada picked to finish in 10th also saw the team pass Scotland and Wales in the overall points table for the World Rugby Seven Series. Canada is tied for 11th with New Zealand with 31 points.

Canada needs to collect as many points as possible in the last three tournaments of the year to finish among the top 14 nations and avoid being removed from the tour. The team’s best result this year was the seventh in Malaga, Spain.

“It’s a dogfight right there now,” said forward Jake Thiel, one of Canada’s best players over the weekend. “We don’t want to be stuck in that bottom four.

“We know what the table is like, we will not leave it to fate. We will take it in our own hands. All these games are important for us.”

Argentina beat Fiji 20-10 in a gold medal match to win its first tournament of the season.

Australia beat Samoa 21-19 in the fight for the bronze medal.

South Africa leads the draw with 111 points, followed by Argentina with 105 and Australia with 100.

Canada made a pair of costly mistakes against Ireland and trailed 12-0 early. Anton Ngongo scored Canada’s only try.

Speedster Brock Webster says the team continues to learn from its mistakes.

“There’s a lot of confidence,” says Webster. “We are a young group so confidence will only grow with our game.

“Yesterday, when we lost the first two games, it was frustrating, but we were able to build and bounce back. It was incredible. When you accept defeat and don’t learn from it, that’s not good. that over the rest of the season, I think we will find some great success.”

A total of 33,444 fans packed BC Place Stadium over the two days of the tournament.

The Easter bunny with drooping ears is one of the most colorful and imaginative costumes in the Sunday crowd. There’s also a pony with a blue mane, a worker in a hard hat and a vest, three characters from Handmaid’s Tale and a few people wearing austere sports jackets adorned with Maple Leaves. A bunch of bananas sitting near a pair of chickens. A herd of cattle rub shoulders with a herd of penguins.

In Sunday’s first game, a fierce tackle on the goal line by Alex Russell early in the first half swayed the momentum as Canada scored 29 straight points in a 29-5 win over Japan. Then, Canada overcame an early deficit to beat Scotland 26-22.

Russell’s contusion shot sent the Japanese ball carrier off the field inches before he scored the first point of the game.

“It was a real tackle,” said playmaker Cooper Coats, who kicked two converted players in the win. “We needed that early. We are proud of our defence. We want to be a team that is stubborn in defence, not letting anyone pass. That is just one example of one player putting their lives on the line.”

In addition to his defense, Russell scored two tries in the win. Captains Phil Berna, Thiel and Anton Ngongo also scored for Canada.

In an emotional win over Scotland, Webster scored a pair of tries and Coats struck three conversions in front of a flag-waving crowd of 15,797. Thiel and Russell also tried to score.

“It was a special one,” said Thiel, who celebrated his efforts by urging the crowd to make more noise. “I think a little bit of emotion just shows how much we want this and how much we want to prove people wrong.

“This week the results weren’t what we wanted in these games but we defended with the best teams, we took this game to the wire.”

Watch Canada host Japan in the quarter-finals of 9th in the HSBC Men’s World Rugby Series Seven in Vancouver. 21:01

The Canadian team competing in the tournament is a youth team rebuilding after 10 veterans retired from a team of seven that finished eighth at the Tokyo Olympics.

“As a group, I think we’re slowly coming together,” Russell said. “We are starting to look a little bit better. We know everyone on the pitch can do some damage on either side of the ball.”