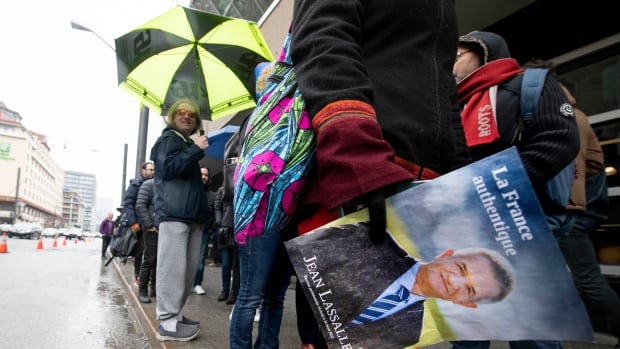 French citizens living in Montreal flocked Saturday to cast their ballots in the first round of France’s presidential election.

Voters in France head to the polls on Sunday. But for citizens abroad, Saturday is their chance to vote.

In Montreal, voters waited in slow lines that circled more than once around the Palais des congres in the city center. Some people waited nearly three hours to cast their ballots.

“We know the line is long [but it’s moving well]that you are all excited to vote, we are doing our best,” the French Consulate in Montreal tweeted in the afternoon.

Polling stations in Canada for the French election are open from 8 a.m. to 7 p.m. ET.

#ElectionFRMtl We know the lines were long (but it went smoothly), that you were all excited to vote, we did our best, and we thank all of our citizens for their help. 🙏 pic.twitter.com/n3mXjAIoXW

Montreal has the largest community of French expats outside Europe. About 67,132 voters registered to vote here — about 10,000 more than the last election in 2017.

And it seems the rain, long lines and waiting times haven’t stopped voters from voicing their opinions.

Omar Djeziri waited two hours in line at the Palais des congres to cast his vote. He said the vote was important, because his family still lives in France.

“I want to decide with them. I am still interested in French politics even though I live here,” he said.

On Saturday, Fouad Benhaida voted for the first time in a French election, and he brought his son with him as a teaching moment.

“It’s not just a right, it’s an obligation that everyone has to do,” he said. “I live here now, but maybe tomorrow I will go back there and I want to have a good country.”

In Ottawa, two polling stations were set up at the private Lycée Claudel school — one reserved for voters living in Outaouais, and the second for voters in Ottawa.

Julien Le Roy cast his ballot there, and said he voted even though he wasn’t particularly inspired by the presidential election.

“The excitement doesn’t really exist,” Le Roy told Radio-Canada in a French-language interview. “I will vote because I think it’s still important, but there isn’t much enthusiasm.”

The long waiting time to get to the ballot box is not the only similarity with the 2017 election.

In 2017, Macron was elected France’s youngest president, and he is now seeking a new mandate.

He was among 12 candidates in the presidential race. The winner is required to get more than 50 percent of the vote, and if that doesn’t happen, second-round elections with the two highest-scoring votes will be held on April 23 for French nationals in Montreal and on April 24 in France.

Macron said on Friday he was confident heading into a weekend election, although right-wing rival Le Pen narrowed the gap in opinion polls days before the first-round vote.

The polling firm said Le Pen, who is running in his third presidential election, would likely finish second behind Macron if they both advance to the finals.

The results of the important first round of voting will start coming in on Sunday.