Ukraine war: No-fly zones should not be ignored, says Bergen 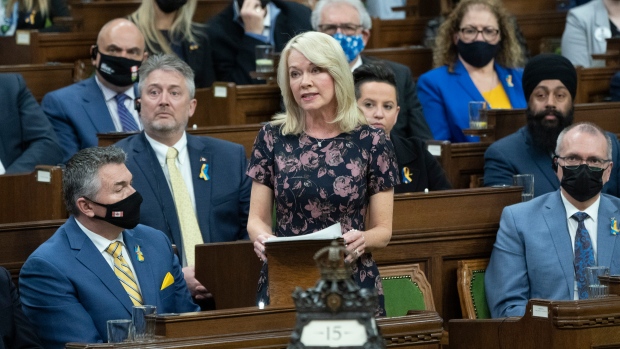 Interim Conservative Leader Candice Bergen said Canada and other NATO members should not ignore Ukraine’s request for a no-fly zone, and should consider further how to protect humanitarian corridors for those fleeing war.

In a speech to Parliament on Tuesday, Ukrainian President Volodymyr Zelensky restated his request for NATO countries to impose a no-fly zone over Ukraine.

“Can you imagine when you call your friends, your friendly countries, and you ask: ‘Please close the sky. Close airspace. Please stop the bombing. How many more cruise missiles do you have to drop on our cities until you make it happen?’ And they in return expressed their deep concern about the situation,” Zelensky said.

Canada has rejected this request as have other allied nations because it would put them in a direct combat position with Russia, potentially shooting down their plane, and possibly triggering an escalating response from Putin’s forces. Secretary of State Melanie Joly called it a “red line” for starting an international conflict, even though she has vowed to “do everything possible to the limit.”

In his response to Zelensky’s speech, Bergen suggested more protection for humanitarian corridors could be the next step.

Asked about how a corridor that would allow Ukrainians to flee to safety without fear of being attacked by Russia would work, Bergen said he didn’t necessarily think this would require a no-fly zone.

“Obviously, it’s up to the experts and others to discuss and decide what is the best way to protect the corridor. Is it by protecting the airspace? Or, it could be by better equipping the Ukrainians themselves. But our point is, we don’t believe Canada or the world will just put their hands up and say there’s nothing we can do,” Bergen said. He quoted Russian President Vladimir Putin as claiming he would not kill innocent people who tried to escape despite evidence to the contrary.

“Ideally Ukraine could shoot them down themselves, but they need to be equipped with those missiles to be able to do that. So that’s obviously ideal, but if they can’t, there has to be some other way that NATO or other allies can help to protect women and children in particular, who are trying to escape,” Bergen said.

“We believe that there should be protection for that humanitarian corridor,” Bergen said. “There are others who say that it is something that should be discussed, and that it can be done.”

Prime Minister Justin Trudeau is heading to Brussels for a special NATO meeting on war next week, and Bergen said at the meeting allies should discuss “every option they have” to help Ukraine.

There are indications from federal Liberals that more defense spending will be part of the upcoming budget, and that’s something Bergen said the Conservatives would “strongly” support.

“It’s one thing to make a promise, it’s another thing to do it. And we will strongly support better spending, more spending on our uniformed men and women, and on our defense budget.”