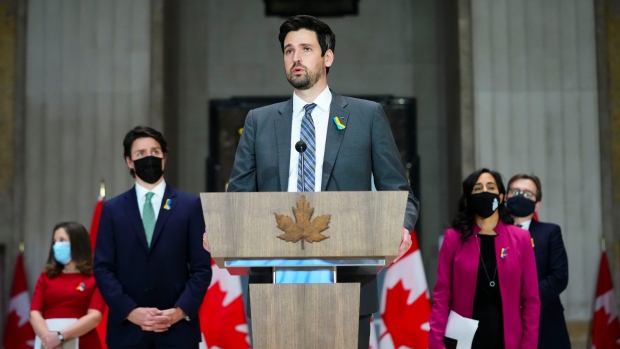 In an interview on CTV’s Question Period, Fraser was asked if Canada was considering implementing a program similar to what the UK is doing — offering households a monthly payment to open their homes to Ukrainian refugees — and he said that “everything is on the table now. . .”

The immigration minister said he would not rule out the tax credit as an example of a way the government could incentivize Canadians to help in what could be a massive, even temporary, resettlement effort.

Citing the response he’s seen from Canadians offering their homes and other support, Fraser said the government is working with nonprofits on how best to coordinate and “maximize” bids that come in.

“We just want to make sure that we adapt the solution to the needs of the people going forward. Many people who come have connections with family and friends from the Ukrainian community, and they may need different types of support to people who come here with nothing and no connections,” Fraser said.

“So we’re working now to develop different types of solutions for customized situations, to make sure that the people who come in have the kind of support they need in their individual case.”

Earlier this week, Fraser announced that Ukrainians wishing to come to Canada temporarily would be able to stay for three years, instead of the previously announced two.

Through the ‘Canadian-Ukrainian Authorization for Emergency Travel’ programme, which is now accepting applications, Ukrainian citizens and their immediate family members from any country are offered temporary residence and the ability to work or study while in Canada.

It is estimated that it will take an average of two weeks for people applying through this temporary residence pathway to be approved through the online portal.

For those who came, the government too set up a job bank so Canadian employers can post available jobs and hire Ukrainians, something that has attracted considerable interest.

For those wishing to live permanently in Canada, the government is setting up a pathway for reunification of separated families with help from Ukrainian-Canadian community groups.

As millions have fled to neighboring countries, triggering the refugee crisis, the government has prioritized processing immigration applications from Ukraine. On Friday, Fraser said more than 9,000 Ukrainians had come to Canada since late January, with roughly the same number of applications still in processing.

“Early signs are that the system is working, a lot of people are applying and more importantly, a lot of people are actually arriving in Canada,” Fraser said, adding that he had been working with his provincial counterparts to ensure support such as housing and health care. who was there for the Ukrainians when they landed.

The minister also said that the government was still looking into the possibility of flying a larger number of Ukrainian refugees.

“This is something we are working on with different partners now. to understand what is the best way forward. The prime minister was clearly discussing this potential idea a few days ago,” he said, adding that the current crisis is unlike the UN-run refugee resettlement program as many Ukrainians have access to travel through Europe.

“Many of them go to the first place they can find safety. They are not in a refugee camp next to an airstrip that we have access to, and that creates unique challenges that require unique solutions,” Fraser said.

Do you have Ukrainian and Russian family members? How do you handle a crisis? Email dotcom@bellmedia.ca.