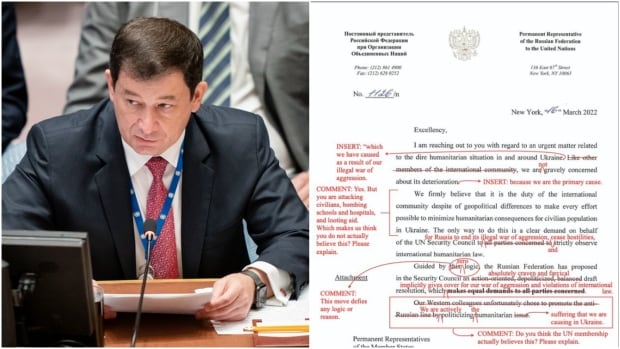 In an unorthodox diplomatic move, Canada’s UN mission on Thursday tweeted a heavily annotated letter that Russia had sent to the UN, including sharp comments in the rewrite, which later sparked Russian accusations of “kindergarten-level slander.”

In a tweet that quickly went viral, Canada’s UN mission added several comments to a March 16 letter from Russia’s ambassador to the UN, Vassily Nebenzia. The letter asked for support for the draft Russian resolution on providing access to aid and civil protection in Ukraine.

Thank You @RussiaUN to your letter dated March 16.

Canada’s mission to the United Nations captioned a section of Russia’s letter that read: “Like other members of the international community, we are deeply concerned by its deterioration,” referring to the “terrible humanitarian situation in and around Ukraine.”

Canada’s mission to the United Nations crossed out the first few words and changed the rest to: “We’re not too worried about the slump,” and inserted at the end “because we were the main culprit.”

In a few sentences below, Canada’s UN mission added a comment asking: “Do you think the UN membership really believes this?” where Nebenzia accuses “Western colleagues” of “politicizing humanitarian issues [sic].”

On the last page, Canada suggests part of an alternative ending: “We want you to know how little we care about the human lives we’ve ruined.”

Lama Khodr, media spokesman for Canada’s Global Affairs, said the tweet was published “to contribute to Canadian public diplomacy about Russia’s invasion of Ukraine and to provide transparency about the disinformation being spread by Russia’s mission to the United Nations.”

VIEW | Joly gave an update on the Russian diplomacy talks:

Foreign Minister Mélanie Joly said she did not trust Russia to negotiate peace with Ukraine in good faith while its military was committing war crimes and crimes against humanity on the ground. 11:58

Anthony Hinton, political coordinator at the Canadian UN mission, took to Twitter on Thursday to explain how the tweet was created.

“This is done internally by members of the creative team, which is responsible for protecting civilians,” he said.

“It took 30 minutes. Only 1 draft was later published. No back and forth with HQ. Goal: transparency for this blatant Russian disinfo, which they sent to all members of the UN.”

For the naysayers out there: this is done at home by creative team members, who are responsible for protecting civilians. It took 30 minutes. Only 1 draft was later published. No back & forward with HQ. Goal: transparency for this blatant Russian disinfo, which they send to all members of the United Nations https://t.co/m8KBPNMUDA

Countries around the world, including Finland, Sweden, Denmark and Estoniahas praised Canadian tweets.

“Thank you @CanadaONU for this kindergarten-level slander of Russophobia!” he wrote on Twitter.

“It just goes to show that your diplomatic skills and manners are on the wane and gives an idea of ​​why your country’s offer for a non-permanent seat on the #SecurityCouncil was rejected twice in 20 years by UN membership,” said Polyanskiy, adding a thumbs-down emoji.

Thank You @CanadaONU on this kindergarten-level slander of Russophobia! It just shows that your diplomatic skills and manners are on the wane and gives an idea of ​​why your country is bidding for a non-permanent seat at #SecurityCouncil rejected twice in 20 years by UN membership https://t.co/3OOcvEP8R8< /a>

He said traditional diplomacy, which tends to take place behind closed doors and kept out of the public eye, is not as effective in today’s information-rich age, where social media has raised public expectations of transparency.

To maintain public support, Robertson said it was in the government’s best interest to make information public early.

“I think diplomacy has to change if it’s going to sustain the public support needed for democracies to act together,” Robertson said. “Because when you go to war, you have to have the support of your public.”

Robertson noted a shift in diplomatic strategy earlier in the Russo-Ukrainian conflict when Western officials shared intelligence about an imminent Russian invasion, something he said would not have happened in the past.

On February 21, days before Russia began its wide-ranging invasion of Ukraine, US Secretary of State Antony Blinken warned that Russian troops were preparing to launch an attack against Ukraine and lay out detailed intelligence on how Russia would do it.

VIEW | The US Secretary of State warns of an imminent Russian attack on Ukraine:

Russia to attack Ukraine in ‘coming days:’ US Secretary of State

At a UN Security Council meeting, US Secretary of State Antony Blinken said Russia was “planning to create a pretext” to attack Ukraine. 3:54

But Robertson said Twitter’s diplomacy had backfired in the past, such as when Global Affairs Canada publicly named Saudi Arabia on Twitter in 2018 for arresting activists and demanding their release.

After the tweet was published, Saudi Arabia ordered the Canadian ambassador to leave the country and freeze all new trade and investment transactions with Canada.

“I think the problem with tweeting is that there’s no nuance and, usually, nuanced diplomacy,” Robertson said.

But he said in this case, the tweet condemning Russia’s actions in the letter provided a bit of nuance because it included the original Russian letter and detailed comments explaining Canada’s position.