Government backs down from plans for online-only asylum applications 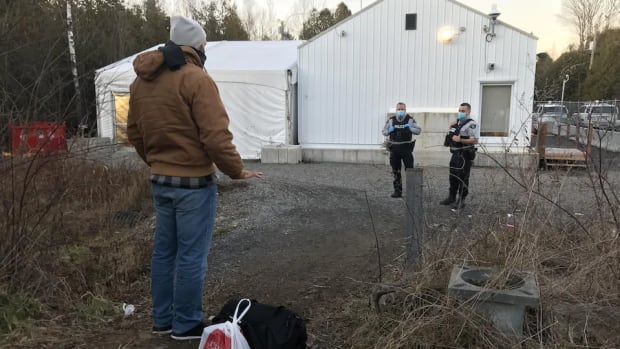 Less than a week after the government said it would require online applications for all asylum seekers to Canada, the immigration minister’s office now says that will not happen.

According to a spokesman for Immigration Minister Sean Fraser, the government has scrapped the idea – which was introduced in the budget submitted Thursday by Finance Minister Chrystia Freeland.

“Accessibility is paramount and filing a claim on paper is still an option,” Aidan Strickland wrote in a media statement on Monday, responding to a question from CBC News.

“Asylum seekers will continue to be treated with compassion by Canada when they submit their claims via paper or electronically.”

On page 119 of the budget, the government outlines its intention to amend the Immigration and Refugee Protection Act, to “require the electronic filing of asylum claims.”

Paper submissions made it difficult to track relevant information and led to “processing delays,” the document said.

But the proposed changes raised concerns with immigration and refugee experts who spoke to CBC News.

“It will leave no room to accommodate individuals who may not be able to access technology easily,” said Arghavan Gerami, an Ottawa-based immigration and refugee attorney.

Gerami said every second counts when applying for asylum. If plaintiffs are stuck waiting for access to technology or advice, “they still have a responsibility to explain the additional delay for not filing a claim earlier. That in turn will cause more anxiety for them.”

In his statement, Strickland said the government made its decision “in consultation with multiple stakeholder groups and clients.

“Digital intake for asylum claims was initially introduced as a facilitative measure during the pandemic, and was well received by clients.”

The government launched an online portal last October, but until now it was only mandatory for most inland claimants; people who were already in Canada at the time of requesting asylum.

“We found it really a huge barrier for people to forget about it,” said Janet Dench, executive director of the Canadian Refugee Council.

“What we often find is that efficiencies are designed to accommodate the government and with very little thought of what it might be like for the people on the other side.”

The Immigration Department intends to resettle some 76,545 refugees and other protected persons by 2022. Some of them will include some of the 40,000 Afghans it promised to take last year after Kabul fell to the Taliban, as well as Ukrainians who fled. themselves from the Russian invasion.

At a news conference in Halifax Tuesday, Fraser said the government would continue to encourage applicants to apply online.

He says there are several benefits to going digital, such as faster processing and the ability to send updates to apps to phones.

“There are certain people who don’t have the means to register digitally, but we are trying to encourage them every step of the way,” he said.

He added he was surprised when he was immigration minister to learn how the immigration system remained paper-based in Canada.

“My secret almost hit the floor after I dug into following my appointments for this portfolio to what extent we can improve by adopting modern and digital systems,” he said.

But Fraser admits that online services alone can be a barrier for some applicants.

“We don’t want to exclude them from the system at the same time we are trying to improve and promote digitization,” he said.

Freeland, who attended the news conference with Fraser, said the government needed to take a compassionate approach, even if digital apps were more effective for some.

“It’s important for governments to be … compassionate, and think about the needs of these most vulnerable and vulnerable people, and to meet them where they are, where they need to be met,” he said.

“There is enormous pressure on our immigration system,” Trudeau said at an event in Victoria on Monday.

“We know that leveraging digital portals will be a way to get more people in quickly, but it’s not meant to be a barrier to prevent people from accessing, it’s actually a way to increase capabilities and pathways for people to be able to get through the process quickly and easily. come to Canada sooner.”