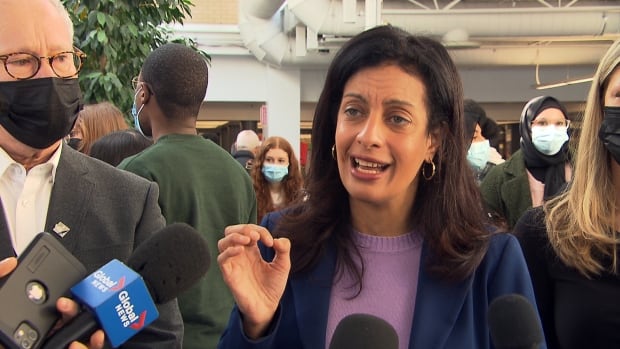 The Legault government’s amendment to Bill 96, which includes a total freeze on the acceptance rate to English-language colleges in the province, is “absolutely hypocritical,” the leader of the Official Opposition said.

The previous plan was to cap annual growth at 8.7 percent, but this sub-amendment, pushed through Thursday, is a complete freeze that will be enshrined in law, making it more difficult to change in the future.

“The proposed measures will allow to quickly reverse the historical trend of declining French-speaking networks and to promote French as the common language of higher education in Quebec,” the proposed amendments said.

The suspension of admission to Quebec English colleges, known locally as CEGEPs, is part of an amendment to be voted on after the National Assembly’s two-week spring break.

Speaking during a visit to Montreal’s Dawson College on Thursday, Liberal Leader Dominique Anglade, who also heads the Official Opposition in the National Assembly, said he could not support Bill 96 in its current form.

He said the Legault government was not transparent in its efforts to overhaul the provincial language law, and was looking at ways to apply Bill 101 to CEGEP.

He said it was clear that the government of François Legault wanted to limit the freedom of young adults.

Simon Jolin-Barrette, Quebec’s minister in charge of French, insists these measures will not prevent students from attending the CEGEP of their choice.

“It’s currently the status quo, and if there is growth, it will happen in the French system,” he said.

The common language in Quebec is French. Thanks to PL96, all students enrolled in a college program in English will now take 3 courses in French to earn their DEC. #polqc #assnat

On Twitter Wednesday, he said Bill 96 would also ensure all students enrolled in a college program in English will take three courses, such as history, politics or science, in French to earn their diploma of college studies. The changes were approved Wednesday evening.

The idea of ​​requiring three courses in French originally came from the Liberal Party who said students should be encouraged to take them, but the government of the Avenir Québec Coalition says it should be mandatory.

“The common language in Quebec is French,” Jolin-Barrette said on Twitter.

Bill 96 seeks to unilaterally amend the Canadian Constitution to define Quebec as a country with French as its official language.

Some 200 amendments aim to strengthen the status of the French language, including calls for stricter sign laws, more language requirements for businesses, and less access to English-language CEGEP.

John McMahon, head of Vanier College in Montreal, said he feared the move would only create more barriers for students wishing to attend CEGEP in English.

“We are concerned about the vitality of the British community,” he said.

“It is a policy that blames the British community for the so-called decline of the French language in Quebec.”

Yves Jusslin is a commerce student who chose Dawson as an opportunity to become fully bilingual.

“I think doing all that will only limit certain people from getting those opportunities,” he said.