Shapovalov says Nadal is favored by the referee 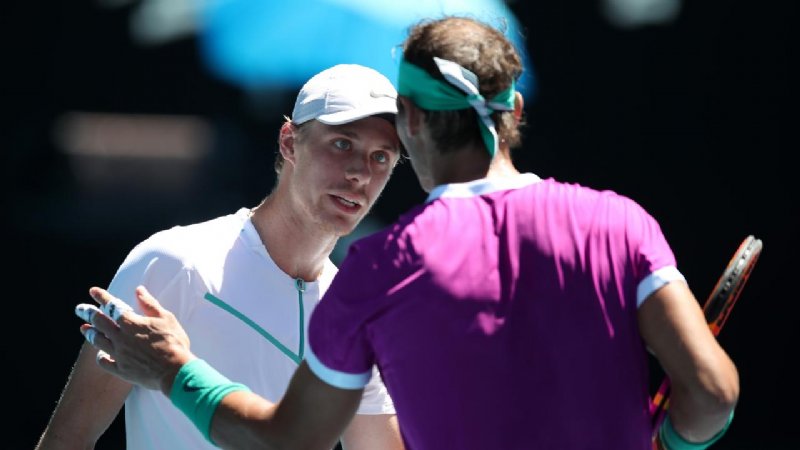 Despite strong statement, Canada pulls back for calling Bernardes ‘corrupt’

Melbourne (Australia) – After losing in the quarter-finals of the Australian Open, Denis Shapovalov of Canada expressed all his discontent with The treatment given by the referee to Rafael Nadal, his tormentor in this Tuesday round in Melbourne. According to Canadians, the Spaniard was favored by the presiding judge, who did not warn him for exceeding the time limit between points. But despite strong statements, the 22-year-old refused for calling Brazilian referee Carlos Bernardes “corrupt” during the match.

“I was wrong when I said he was corrupt or whatever I said. It was hot and emotional at the time, but I don’t think it was fair to see how much Rafa got through,” said Shapovalov after the 6/3 defeat. 6/4, 4/6, 3/6 and 6/3. “I respect everything Rafa has done and I think he’s an extraordinary player. But there must be some restrictions and rules that apply. As a player, it’s very frustrating to feel like you’re not only playing against a player, but you’re playing against the referee as well.”

“I mean, I was really ready to take his serve and the clock was ticking 3, 2, 1…to zero, and I looked at the referee, and obviously I had to say something: I’m ready. I’ve been playing for a minute and a half, and he told me he wasn’t going to give Nadal a foul because I wasn’t ready to play. For me, it’s a big joke if someone said that,” added the world number 14.

“And then, after the fourth set, he had already received two medical calls and went to the dressing room. Last year, I was not allowed to go into the locker room because I had requested a medical time-out. That’s difficult. It was a long break after the fourth set. For that reason, and the game went cold. It becomes much more difficult to play. Again, not trying to say anything against Rafa. He’s a great player. I have great respect for everything he does. finished. But I think it’s very difficult and frustrating to have to deal with all this”, added the Canadian, who is seeking a second Grand Slam semifinal of his career.

Shapovalov was then asked if he thought Nadal deserved preferential treatment for being him: “That’s clear. 100%. In every other game I played, the pace was very fast because the referee controlled the time after every point. Today, after the first two sets, I’ve played an hour and a half, because it takes a long time after each point”.

“And as I said, I was absolutely, for the same reason, not allowed to go into the locker room last year here in Australia because I requested a medical time-out. I do not dispute that Rafa asked for medical treatment. time-out or whatever. up to you. But how can you be medically evaluated and have a bathroom break at the same time and cause so many delays in the game? It’s not balanced.”

“You are all corrupt,” Shapovalov told referee Carlos Bernardes.

(the argument relates to the time Nadal took after the set break) pic.twitter.com/zY7443KoSd

The Canadian also revealed the contents of his conversation with Nadal during the match. “It was nothing against Rafa. Since he was going to serve I was hoping the referee would see it, but the referee looked at me instead. It didn’t make sense to me. The guy was looking at me at me so I just looked at him like ‘why you looking at me?’ It was right after I told him that and it was wrong. I just explained to Rafa that it had nothing to do with him”.

‘I’m happy with the way I’m back in the game’, says Canadian
Regarding the match, Shapovalov talked about the challenges of facing a duel of five sets and lasted more than 4 hours. “We’re both fighting physically, it’s a five-set match. Obviously he called the doctor for painkillers. But in my head, I don’t focus on whether or not he’s physically fine. I also have pain and blisters. .100% for the whole tournament, so I don’t think it’s something I’m paying attention to.”

World number 3 executioner Alexander Zverev in the round of 16, the Canadian also evaluated his own performances: “I’m happy with the way I fought and got back into the game. I found my game at the end of the third set and also in the fourth set. It’s good to have more time in the Grand Slam to had a chance trying to find your game. It was a good tournament for me overall. In the third, fourth and fifth sets, I felt like I was the better player, I had more chances. But it only took me one bad game to decide game.”