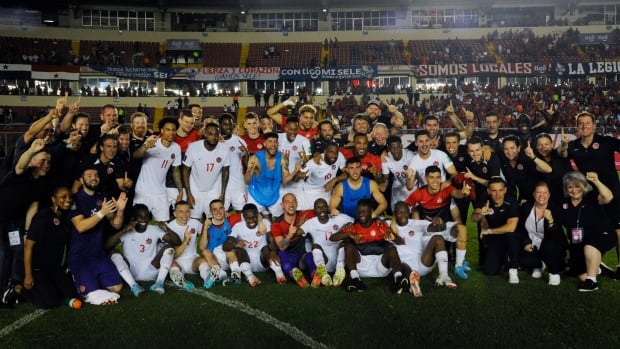 This is going to be very real for the Canadian men’s soccer team.

Friday’s draw in Doha will determine Canada’s opening round opponents for the 2022 FIFA World Cup, which runs from November 21 to December 18 in Qatar.

Canada clinched a first World Cup place since 1986 (that was their only previous tournament appearance) following a 4-0 win over Jamaica in Toronto on Sunday. The Reds closed their qualifying campaign with a 1-0 defeat in Panama on Wednesday, a result that still allowed them to finish in first place in CONCACAF qualifiers with an 8-2-4 record.

But while they finished top of their territory, Canada dropped five places in the world rankings released Thursday, from No. 33 to No. 38. That means Canada is grouped with the lowest-ranked team for the draw, which increases the odds against two teams. of the top 10 teams in the world at their opening stage.

Canada coach John Herdman, however, didn’t seem too concerned about the draw, saying Canada’s performance meant not too many countries would be excited to face Canada in Qatar.

“When you look at the campaign, when you see 20 games, and a team that finished above Mexico and the USA, I think that has to change its mind,” Herdman told reporters after the defeat in Panama.

The 32 World Cup teams have been divided into four pots based on the latest FIFA world rankings released on Thursday. Friday’s draw will divide the 32 teams into eight first-round groups at the World Cup.

Pot 1 consists of hosts Qatar and the top seven ranked teams. Pot 2 contains eight teams ranked 9-16, and teams ranked 17-24 are in Pot 3. Pot 4 has the five lowest-ranked teams — including Canada — along with three placeholders for the two winners of the intercontinental playoffs and the winners of the European playoffs.

A little monkey wrench has been thrown into the process, as three nations have yet to qualify for the World Cup.

Costa Rica face New Zealand on June 13 or 14 in the CONCACAF-Oceania playoffs, with the winners qualifying for the World Cup. Australia meets the United Arab Emirates on June 7 to determine the winner of the Asian playoff who will face South American qualifier Peru at the end of the month, with the winner of the intercontinental playoff also qualifying for Qatar. Scotland host Ukraine in early June (this game was originally scheduled for last week but was postponed due to Russia’s invasion of Ukraine) for Wales’ playing rights in Cardiff at the end of the month. The winners of the European playoffs will also earn a place in the World Cup.

Here are the four pots (world rankings in brackets) for Friday’s draw.

The draw will begin with each team from Pot 1 being drawn into one of eight groups: Group AH. As the host, Qatar automatically enters Group A.

After Pot 1 is drawn, they will move to Pot 2, then Pot 3 and finish with Pot 4. Once each team is selected, a second draw will be held to determine the position of each country in the group. Pot 1 teams are automatically assigned 1st place in each group — so, for example, Qatar is A1. This position is important because it determines the order in which the teams in each group will face each other.

It is also important to note that countries from the same confederation or geographic area cannot be drawn into the same group. So, for example, South American teams Brazil and Uruguay cannot be in the same group. However, this rule does not apply to Europe. Since there are 13 European countries, there will be at least one and no more than two in each group. This means that five of the eight groups will be filled with two European teams.

The geographic restrictions also mean that Canada cannot be drawn against fellow CONCACAF nations Mexico and the United States from Pot 2. As a result, Canada will end up against one of the Netherlands, Denmark, Germany, Uruguay, Switzerland or Croatia. from the pot. The same constraint means Canada cannot be drawn against the CONCACAF-Oceania playoff winners from Pot 4.

Canada is 33rd in the February rankings, and if Canada wins in Panama on Wednesday, Canada will move up to 30th and jump over Tunisia’s ranking (No. 35), meaning it will go into Pot 3. This will increase the chances of Canada being placed to an easier group at the World Cup.

As it stands, Canada is in Pot 4, so it could theoretically be drawn into a group with two of Europe’s top teams (like Germany and Serbia), and Brazil or Argentina. Unless Canada gets lucky and pulls Qatar out of Pot 1, they will end up with the two nations in the last 16 in their group — and could be two in the top 10 if they draw against the Netherlands from Pot 2.

But Canadian coach John Herdman didn’t seem too concerned about the missed chances of being placed in Pot 3. He pointed out that his side have only lost twice in 20 qualifying games, and finished top of the CONCACAF table ahead of Mexico and the US, who are both 15th. big.

“We can go to this World Cup without any fear at all,” Herdman said. “Nobody really expected Canada to go and win it. I don’t think a lot of people would expect us to get out of the group… [But] we have traveled thousands of miles, we have played many minutes, we have kicked every ball, we have never stopped, and we are on our way to Qatar. [We’re] No. 1 in CONCACAF. I’ll sleep well tonight.”