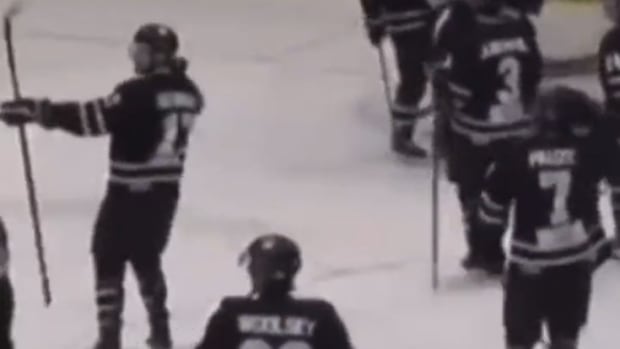 A Manitoba hockey player has been suspended after a weekend game in which he appeared to make a racist gesture towards the visitors from Waywayseecappo First Nation.

The incident happened just as the horn sounded to end the match between the Dauphin Kings and the visitors from Waywayseecappo Wolverines on Saturday.

The Kings scored with less than 30 seconds left to win 3-2 and as their players celebrated near their goalkeeper, and several Wolverines were skating, a Dauphin player raised his wand and made what appeared to be a bow and arrow. . attitude.

Player, identified in the official game sheet as 20-year-old defender Klim Georgievwas immediately given a serious foul, which was a suspension of at least one game, according to Manitoba Junior Hockey League rules.

In a vague statement on social media on Sunday, MJHL confirmed the suspension and said it was “taking situations like this very seriously.”

It did not name the player or the reason for the suspension, saying an investigation was being carried out by outside consultants.

When reached for comment by CBC News on Monday, a spokesman for MJHL declined to offer more.

In an email, the spokesperson said “out of respect for the ongoing process to address this issue, please refer to the current statement and information issued last night by MJHL.”

There were other people’s posts on social media, claiming a Wolverine player made the same move first, after tying the game up with 14 minutes left to play. He allegedly skated near the Kings bench to celebrate from one knee.

No one from Wolverine was available for comment on Monday. Head coach Doug Hedley and Morley Watson, chairman of the team’s board of directors, said in fairness to the ongoing MJHL investigation and the players involved, it was too early to say anything at this point.

The Dauphin Kings also posted a message on social media on Sunday, saying they along with MJHL were reviewing “the actions of one of our players” but “we must all remember that this is a young man still learning.”

The post called it an opportunity for the hockey club to educate all involved.

Thank you for your feedback, but this statement is 100% unacceptable. The correct name is “Waywayseecappo”

It’s 2022. One doesn’t have to learn how not to be racist. Being racist is a choice. https://t.co/bfLfFn0tQg

The post was met with mixed reactions from Hockey Indigenous, a nonprofit that promotes Indigenous hockey in North America.

In response to Raja’s tweet, Hockey Indigenous thanked the team for investigating the matter but also denounced it for not using the proper name of Waywayseecappo — the tweet cut it down to Wayway.

It also criticized comments about the incident as a learning opportunity, saying “one should not learn how not to be racist. Being racist is a choice.”

In a separate tweet, Hockey Indigenous called the incident a “dark attack” which was “absolutely disgusting and painful.”

Olympic hockey star Brigette Lacquette, who is from Dauphin, also weighed in on the matter, saying it was unacceptable and should be addressed.

“We can no longer hide this kind of behavior under the carpet. It doesn’t matter if ‘go back to the other team’ is racist,” he wrote.

Lacquette was the first First Nations hockey player to become a member of the Canadian women’s national hockey team, and she won a silver medal with them at the 2018 Olympics in Pyeongchang.

Allowing this type of behavior to continue is unacceptable. It’s important to stand up to it and overcome it. We can no longer sweep this behavior under the carpet. It doesn’t matter if that “go back to the other team” is racist. @mjhlhockey @dauphinkings @cjhlhockey https://t.co/NpUUP0iVwK

The Jacksonville Icemen then released Panetta, which was in his second season with the team.

About a month before the incident, an investigation was launched by PEI Hockey after the 16-year-old goalkeeper from Nova Scotia was allegedly the target of racist abuse in Charlottetown.

Al MacIsaac, president of PEI Hockey, said CBC News: Kompas he was “fed up” to learn that Mark Connors, who is black, had said he was called the N-word several times by the young people in the stands.

The Halifax Hawks U-18 AA player also said that after the game, another member of the PEI team told him hockey “is a white man’s sport.”