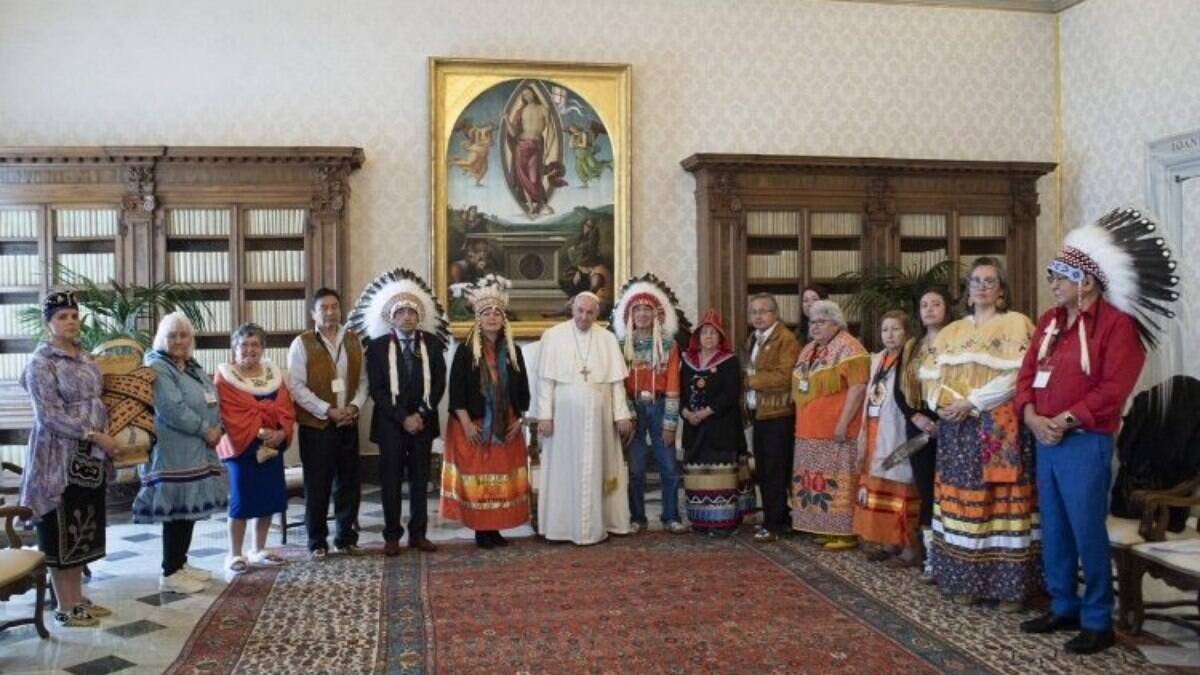 Pope Francis apologized on Friday for crimes committed at a former Catholic boarding school for indigenous children in Canada.

In public hearings with indigenous Canadians and bishops, religious representatives expressed “outrage, shame and pain” at the role Church members play “in the abuse and lack of respect” for indigenous peoples’ identities, cultures and “even spiritual values”. . .

“All of this goes against the gospel of Jesus. For the despicable behavior of this member of the Catholic Church, I ask God’s forgiveness and I want to say to you from the bottom of my heart: I am deeply saddened and I join my brethren of the Canadian bishops in apologizing,” the Pope said in his speech.

“You cannot transmit the content of faith through modalities that are foreign to faith itself. It is terrible when, precisely in the name of faith, there is a counter witness to the Gospel,” added Francis.

The hearing with the Canadian natives followed the discovery of a mass grave with hundreds of unidentified bodies, mostly children, in a former government boarding school run by the Catholic Church.

The first grave was discovered last May in the grounds of an old school in Kamloops, in the western province of British Columbia, revealing the never-healing wounds of the forced Christianization of the Canadian natives.

This pesantren has the aim of “educating” the indigenous population according to Catholic teachings, but, for that, they forcibly remove children from their community and force them to abandon their customs and language. In addition, students are often victims of sexual and physical abuse by teachers.

The Catholic Church in Canada had asked for forgiveness in September 2021, following an attack on a parish in protest of crimes committed at a residential school, but Francis has not formally apologized.

During the week, the Pope met with delegates from the Metis and Inuit communities and with representatives from the Assembly of First Nations (from English “First Nations”, as the indigenous Canadian community is called), occasions where he heard reports about the pesantren. .

“I can touch it with my hands and take to my heart, with great sadness, the reports of the suffering, deprivation, discriminatory treatment and other forms of abuse that many of you suffer, especially in residential schools. It is terrible to think of the desire to instill a sense of inferiority, to make a person lose his cultural identity, to cut off his roots, with all the personal and social consequences it has had and continues to cause”, the Pope said.

It is estimated that about 150,000 natives passed through residential schools until 1970. “I want to tell you that the Church is on your side and wants to continue walking with you,” he said.

The pope also said he would visit Canada soon, possibly at the end of July, when Catholics celebrate Saint Anne. “I rejoice when the thought of the homage to Saint Anne, the grandmother of Jesus, spreads among many of you. This year, I want to be with you in those days. We will meet each other in Canada, where I will be able to better express my closeness,” he said. (ANSA).

between no
Second Last Channel on Telegram

and see today’s headlines in Brazil and in the World.