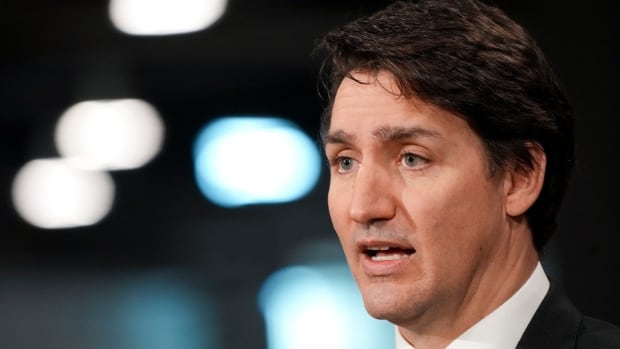 Prime Minister Justin Trudeau said on Friday his government did not want to see an escalation of the Russo-Ukrainian war that would draw NATO forces into “direct conflict” with Russia in eastern Europe.

Speaking to reporters at a transit announcement in Mississauga, Ontario, Trudeau said Canada and its allies were focused on dealing an economic blow to the Russian economy in retaliation for the invasion – and would not establish a no-fly zone over Ukraine. .

The NATO-imposed no-fly zone means Western forces will be responsible for keeping Russian warplanes from flying over Ukraine. That could result in direct combat between NATO forces and the Russian military—a dramatic escalation of the war.

So far, Western countries such as Canada have imposed sanctions and sent lethal aid to help Ukraine carry out their own fight against Russian President Vladimir Putin and his troops.

“The thing we have avoided so far, and will continue to need to avoid, is a situation where NATO forces are in direct conflict with the Russian army. That would be a very unfortunate level of escalation,” Trudeau said.

“We will continue to impose punitive consequences on Putin and his cronies in the Kremlin and on the Russian people until they understand what a terrible mistake Putin has just made.”

At a lengthy press conference with reporters in Kyiv on Thursday, Ukrainian President Volodymyr Zelensky pleaded with NATO countries to establish a no-fly zone – or at least send planes that could be used by Ukrainian fighter pilots.

“I hope the sky will close. If you don’t have the strength and courage to do that, then give me a plane. Isn’t that fair?” Zelensky said.

“I say every day, if you can’t close the sky now, then give us a timeline of when you will do it. If now you can’t provide a timeline, tell us how many people have to die?”

Trudeau also ruled out sending Armed Forces of Canada (CAF) jets to Ukraine, saying military personnel there would not know how to use them properly.

“The Ukrainian military has trained Soviet-style MiGs and fighter jets that Canada does not have,” he said.

Trudeau said the strongest response to Moscow’s aggression was sanctions that crippled the Russian economy. 1:17

As Ukraine’s situation continued to deteriorate, Trudeau announced he would leave for Europe on Sunday to meet with leaders and officials in Britain, Latvia, Germany and Poland.

Canada and the UK have worked closely over the past two weeks – pressuring other countries to further tighten the screws on the Russian economy by removing Russian banks from the SWIFT interbank payment system, closing airspace to Russian civilian aircraft and imposing punitive sanctions over officials. The Kremlin, Russian oligarchs and big Russian business.

Canadian troops have long been stationed in Latvia as part of Operation Reassurance, which has deployed CAF personnel in central and eastern Europe to undertake reassurance and deterrence measures.

Unlike Ukraine, Latvia is a NATO country – meaning members of the treaty alliance would be obliged to defend it if Putin pushed his troops further into eastern Europe.

In an interview with the Toronto Star, Joly said Canada and its partners “need to make sure that we don’t spark international conflict.”

Joly said Putin’s “irrationality” would make a wider war very dangerous and the focus should remain on economic penalties.

“Of course there is a level of irrationality with Putin especially at this time. And to get any form of off-road or diplomatic solution, we have to be at a level where the pressure on him, and around him, is very high,” Joly told the paper.

Canada is not the only country looking to avoid an all-out war with Russia. Speaking in Brussels after meeting foreign ministers from NATO members on Friday, NATO Secretary General Jens Stoltenberg said the alliance was not interested in deploying ground troops to Ukraine or enforcing a no-fly zone – at least not at this stage of the conflict.

In a direct appeal to Putin, Stoltenberg called on the Russian leader to end his unwarranted war against Ukraine “immediately and unconditionally.”

“NATO is not part of the conflict,” Stoltenberg said. “We are not looking for war, conflict with Russia. At the same time, we need to ensure there are no misunderstandings about our commitment to protecting all allies.”

US Secretary of State Antony Blinken also said that NATO “does not seek conflict” but is “ready for it.”